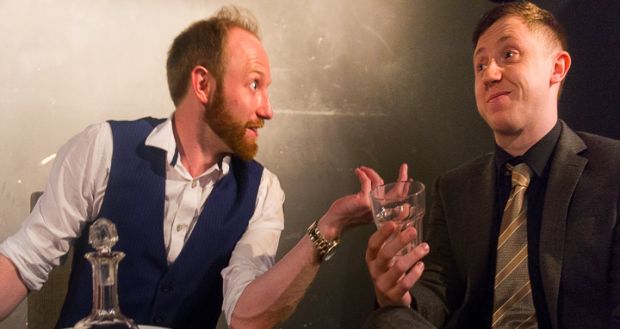 Pros: This is theatre at its most elementary: all there is on stage is actors and a few props. It’s great to see acting being focused on rather than masked by gimmicks.

Cons: Although most of the new writing was good, the pieces did not all last the same amount of time: some were too short and some were too long.
Bare Essentials, The Savoy Tup – Review

Pros: This is theatre at its most elementary: all there is on stage is actors and a few props. It’s great to see acting being focused on rather than masked by gimmicks. Cons: Although most of the new writing was good, the pieces did not all last the same amount of time: some were too short and some were too long. I’m usually quite apprehensive when it comes to theatres above a pubs. I’ve been to several and the quality varies from venue to venue. One thing I do notice is that whenever I go to see a show&hellip;

Overall a fun evening with a variety of new writing and some very talented actors.

User Rating: 4.55 ( 1 votes)
I’m usually quite apprehensive when it comes to theatres above a pubs. I’ve been to several and the quality varies from venue to venue. One thing I do notice is that whenever I go to see a show above a pub, I feel like the venue is just too small. Entering the Savoy Tup, I was joyfully greeted by the host as she marked an E on my hand and allowed me to walk in. Walk in to where? It seemed that I was basically walking into a pub. I’m not one to jump the gun, so I decided that I would give it the benefit of the doubt. The audience was spread across the room on chairs, bar stools and sofas. I was seated on a non-ergonomic bar stool.

The show began with a word from Liam, the host of the night as well as director and producer of the show, who acted as compere for the performance of Bare Essentials. He introduced the title of every play and had the arduous task of keeping us entertained whilst there was a change over. He did a fantastic job: jolly and witty, he kept the pace of the entire evening.

The night consisted of six new pieces of writing, some were short plays and others were extracts of longer plays. Their themes included life, love, facebook, tight-rope walking, science fiction and letting go. Although they were generally good pieces, some plays were short and the pieces which you wanted to end ended up being the longest. This frustrated me, as it would have been much nicer to watch same length performances throughout the evening.

That being said there were some very good pieces. One of my favourites was Going Viral, a play set in the near future. It’s a child’s 15th birthday and the parents have a surprise for her: a Facebook account. As the play unravels, we find out that the child is actually an internet sensation because of her lisp. The writing was fluid with great comedy and it was very relevant. It was beautifully carried by all actors but notably Laurie Harrington, who was a fantastic character actress as the mother and had me laughing out loud throughout.

Another play worth mentioning is Thin Air, written by Tom Coash. Set on top of a tightrope, Bird tells us about the art of tightroping. This is the only play where I felt there was a true arc; beginning, middle and end. The actress Freya Parsons transported us on a journey and a couple of times I forgot all she was doing was standing on a chair.

Finally I have to give credit to the play with one of the longest names I have come across: How to Murder Someone and Make Sure They’re Absolutely, Definitely Dead by Matthew Smith. Although the title is somewhat melodramatic, the content is not. Smith develops each character sensationally and manages to mask a dark undertone with some very funny comedy. Kudos should be given to the actors, mainly Jonathan Whitaker who played the role of psychotic lover with perfect precision.

Overall this was a really fun evening. Although some of the writing was somewhat mixed, the acting was of a very high standard. If you like new writing, an intimate surrounding and a cheap night, then this is for you!

Unemployed but not a slacker. Andrew believes that he was dropped in a tub of theatrical acid as a child. Although he did not gain the ability to fly, see through solid objects or shoot laser beams out of his eyes he did gain an intense profound love for everything theatre/TV/film related. He recently worked as an agents assistant in a busy Soho office and is currently looking for work. When he is not viewing theatre, acting or writing you can find Andrew on a platform 10m up in the air, swinging about like a chimpanzee. Did I say swinging, I meant flying. It seems that Andrew is a superhero after all.