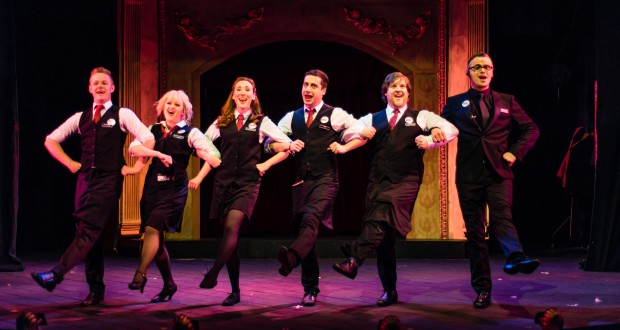 Pros: A strong cast takes you on a camp and energetic frolic into the unique world of being an usher in a West End theatre.

Cons: The songs are a bit weak so don’t expect to be humming anything when you walk home.
Ushers: The Front Of House Musical, Charing Cross Theatre – Review

Pros: A strong cast takes you on a camp and energetic frolic into the unique world of being an usher in a West End theatre. Cons: The songs are a bit weak so don’t expect to be humming anything when you walk home. It’s a well-known fact amongst my friends that I’m prone to a bit of a musical (interpret as you will), so when I heard about this show I jumped at the chance to pop along to see what it was all about.  Ushers: The Front Of House Musical isgreat fun and easily the campest thing I’ve ever seen&hellip;

This is a must see for lovers of musical theatre and those that the genre terrifies alike, as you will be converted. A non-stop roller coaster of fun right from the start; it’s laugh out loud funny and a good night out.

It’s a well-known fact amongst my friends that I’m prone to a bit of a musical (interpret as you will), so when I heard about this show I jumped at the chance to pop along to see what it was all about.  Ushers: The Front Of House Musical isgreat fun and easily the campest thing I’ve ever seen on the West End stage. Yes it surpasses Wicked on the camp-o-meter!

Having reviewed the show back in March, Everything Theatre was curious to see the extended run featuring a new cast in action, and happily, the show continues to impress us. Ushers: The Front Of House Musical is all about those unsung heroes that we never pay attention to as they hand us our programmes, show us to our seats or grin at us when we buy our overpriced ice cream at interval. Ushers have dreams and feelings too and this, thanks to some feather boa’s and pazzaz, is what this show is all about.

From as soon as you step into the Charing Cross Theatre you are instantly immersed into the fake world of the Oops! I did It Again: Britney Spears Musical. Yes, you read that correctly. The musical is a massive success due to Britney Spears being played by Sheridan Smith and Michael Ball playing her mother (camp enough yet?) and we are merely witnesses to the ushers working on the show. I was so happily distracted by all the large Britney musical posters that I didn’t even realize that the usher who greeted me and showed me to my seat, after working out the alphabet and how to get to row K, was part of the show. Immersive theatre at it’s very best. As an audience we were all creaking our necks around the auditorium trying to clock what all the other ushers were up to and I loved this. It was hysterical.

The show, directly superbly by Max Reynolds, is a hoot and needs to be seen to be believed. The six cast members work really well as a strong ensemble with all of the joint numbers being energetic, fast paced and fun. The incredible Ceris Hine as the selfie and Michael Ball’s balls obsessed Rosie, stole the show for me. Her comic timing had me in stitches throughout both acts and that is thanks to the brilliant one-liners in James Rottger’s superb script. Carly Thomas and Ross McNeill as the star-crossed lovers were great and believable. Jacob Chapman’s evil theatre manager, Mr. Robin Pockits (see what they did there?), was funny in parts although I did feel like I was watching a tamed down version of Steve Pemberton’s Pauline from The League Of Gentlemen at times.  The gay love story between Liam Ross-Mills and Daniel Buckley needed some work I felt, as I didn’t connect with their characters as much as the rest.

The only flaw for me with this musical was the songs, score and some of the vocals, which is a bit worrying when you’re watching a musical. I felt some of the lyrics, although very creative and original, were a bit formulaic. The score, for the most part, was a bit too jazz handy for me. However that said, I was having so much fun watching everything that I genuinely didn’t care that the songs weren’t as strong as I would expect from a West End musical.

Ushers: The Front Of House Musical is the perfect tribute and hilarious homage to all of those hard working actors who have to usher while dreaming of becoming West End Wendy’s! But like Britney Spears says, “Work Bitch!”