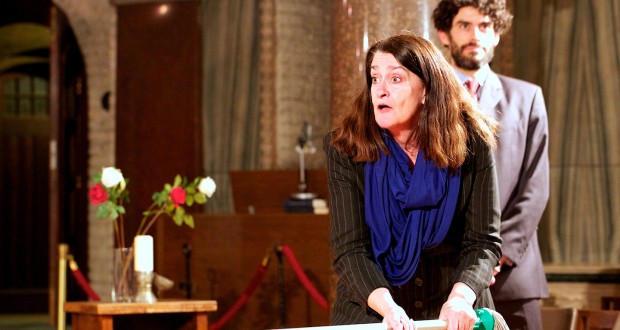 Pros: Interesting characterisation and a timeless message. Cons: More physical direction would help to smoothly incorporate ghostly dialogue. The King Must Lie opens on the exciting revelation that King Richard III’s bones have just been discovered beneath a car park in Leicester. The announcement is delivered by council member Len (Toby Osmond), who eagerly awaits the positive PR this event will deliver for his city. He is soon joined by academic Ambrose (Steve Blacker) and Richard III enthusiast, Barbara (Kathy Trevelyan) who offer their differing historical perspectives on the matter. Unbeknownst to the group, the spirit of King Richard&hellip;

A beautifully written, well delivered play. Interesting, entertaining and not to be missed.

The King Must Lie opens on the exciting revelation that King Richard III’s bones have just been discovered beneath a car park in Leicester. The announcement is delivered by council member Len (Toby Osmond), who eagerly awaits the positive PR this event will deliver for his city. He is soon joined by academic Ambrose (Steve Blacker) and Richard III enthusiast, Barbara (Kathy Trevelyan) who offer their differing historical perspectives on the matter. Unbeknownst to the group, the spirit of King Richard himself (John Gregor) oversees the whole conversation, adding a fourth, uniquely personal viewpoint.

Set almost exclusively within Len’s office, the play is largely conversational and explores several ideas around fact vs. interpretation. The dialogue introduces Richard as an ugly, cruel tyrant before switching to the image of an honourable, misunderstood monarch. The play creates a dramatic irony, in allowing Richard to interject his own feelings towards the burial, unheard by the characters as they squabble over who the bones ‘belong’ to.Whilst the piece clearly has a strong historical quality, for me this take on modern day attitudes towards publicity vs. the individual is timeless and could equally be applied to current public figures.

Lighting and sound effects are used with care throughout the performance. Considering the supernatural element, it might have been tempting to rely on large, theatrical effects to create impact, but The King Must Lie achieves this through much simpler means. Richard is visually set apart from the other characters by his white gown and period headpiece. He also carries a candle, the light of which is used to great effect during the final scene. Whilst little to no sound effects are used throughout, medieval choir music fills the auditorium between acts, creating an atmosphere perfectly suited to the tone of the play.

In a nod towards historical theatre styles, the play begins with a rhyming prologue and ends with an epilogue. The actors deliver both beautifully and I felt they added a certain poignancy to the messages within the body of the piece. The writing and acting compliment each other well. Equally versatile, they move seamlessly from poetic to naturalistic and back again. Osmond, Blacker and Trevelyan are perfectly cast in their roles, delivering huge amounts of dialogue whilst giving the impression that every response is natural and spontaneous. Gregor presents an unusually intimate image of Richard, expressing an impressive range of emotions and encouraging us to empathise with his uncertain plight.

The only element that left me slightly unsure, was the relationship between Richard and the other characters. Once or twice, time appeared to freeze whilst Richard spoke. Other times, Len, Ambrose and Barbara continued to move, in silence. For the most part, conversation between the ‘living’ characters flowed continuously, which made pausing for Richard’s lines seem a little unnatural. Given the high quality of the script and acting, I think this could be remedied by a little more physical direction, as the pauses were far less noticeable when the characters were on their feet.

As a setting for this piece, the White Bear Theatre was a fantastic choice. Although it felt much quicker, the play lasts two hours, so being able to grab a refresher from the venue’s pub during the interval was an added luxury. Having visited a few other venues of this size, I was particularly impressed by the staff at the White Bear Theatre. Both the box office and bar staff members were very helpful and welcoming, creating a friendly atmosphere for everyone.

The King Must Lie takes an interesting look at modern day attitudes towards history, public image and the rights of the individual. Combining naturalistic performance with a supernatural twist, this unique and entertaining drama is not to be missed.