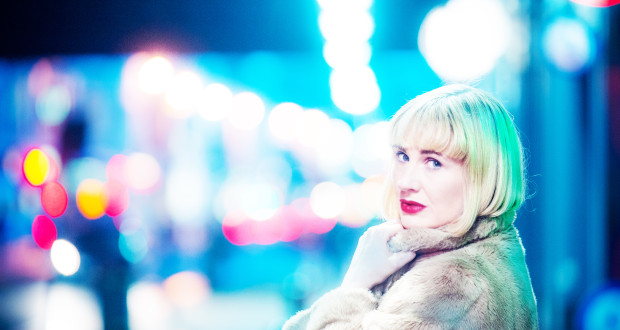 Pros: Bonkers. Cons: A bit too bonkers. Biding Time (Remix) is a suitable fit for the east end environs of the Arcola Tent in Dalston, attracting a suitably hipster-ish audience for its experimental, avant-garde staging. Performed in the round with the audience milling about as if we’re all at a rock gig, the company of musicians tell a story which charts the rise and fall of an experimental rock band. Aided by wacky visuals, the company succeed in finding new ways to perform a story which has already been told numerous times. My theatre-going companion and I were greeted&hellip;

Best to neck a few shandies before watching this one. And turn the volume on your headphones very loud.

User Rating: Be the first one !
Biding Time (Remix) is a suitable fit for the east end environs of the Arcola Tent in Dalston, attracting a suitably hipster-ish audience for its experimental, avant-garde staging. Performed in the round with the audience milling about as if we’re all at a rock gig, the company of musicians tell a story which charts the rise and fall of an experimental rock band. Aided by wacky visuals, the company succeed in finding new ways to perform a story which has already been told numerous times.

My theatre-going companion and I were greeted with headphones upon entering the Arcola Tent. What we encountered was more of a silent disco than a theatre experience. With techno blaring at full volume, we were encouraged to walk about the space, have a dance and admire the visuals greeting us from two overhead projectors on either side of the space. The two techies visible to the side of the stage looked more like deejays than lighting and sound crew. A great start!

After a bit of a boogie a giant white bunny drags something onto the stage. Weird? Yes? Just a bit reminiscent of Donnie Darko. This thing he has dragged onto stage is a body bag. As the white bunny slowly unzips it, out emerges a blonde woman who looks a touch like Debbie Harry. I am getting excited. And so the band who had previously been sleeping on the stage, awake, and everyone starts jamming. The whole enterprise is so fantastically bonkers that any attempt on my part to explain, describe or judge the piece would surely be detrimental to any future audiences. It’s just best to book a ticket and have a few shandies before you go see it.

This is a piece about the pitfalls of the music industry. The band are lured into signing with a label by a manager who promises them stardom and money. However, their music is too underground for the bigwigs on the label and the band are forced to come up with a sound that’s more radio friendly, much like the EDM offerings on the radio today. And so begins the downward spiral. The songs are all fantastic however. There are numerous Goldfrapp(ish) numbers, some songs that reminded me of PJ Harvey’s To Bring You My Love era and songs that sounded as if the electronic band Teeth had written them. The whole group are very much an art pop collective.

The bunny that helps narrate the story even though it doesn’t actually speak a word is scary and morose. At one point it appears to remove the singer’s heart from her chest and start cooking it in a frying pan. An obvious metaphor for selling her soul to the music label. When it approaches the audience we all move away and cross our fingers that it doesn’t come anywhere near us.

This is not for everyone. Some people will be exasperated with what at times appears too arty, highbrow and nonsensical. However, I was impressed that there was a clear narrative throughout. The danger when developing the show, could have been to take itself too seriously and thankfully the company have avoided that. There are times when the weirdness of the show seems a bit too much and even though it is only an hour long the pace can lag. However, that is a minor quibble.

I can imagine this show touring summer festivals. It’s the kind of thing playing in a tent you stumble into bedraggled and drunk at four am with your friends and cannot quite believe what you’re seeing. As this is a theatre website I need to pass judgement on its theatrical accessibility however and not just praise its originality. The four stars awarded are mainly for the company who tell a human story and embellish it with detail that is not superfluous but very clever and very cool.

Director: Ben Harrison
Producer: Tromolo Productions
Booking until: Until 24 May at various venues across the UK.
Book online: http://www.bidingtimeremix.com/