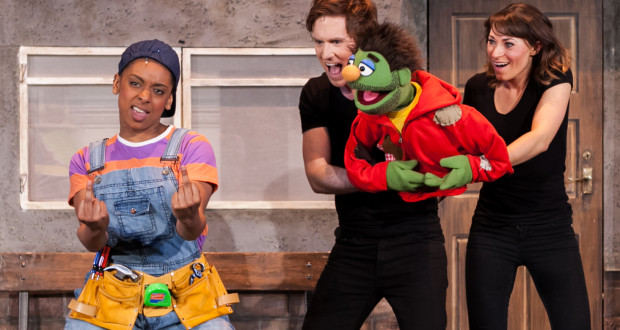 Pros: Puppets giving business advice. What could be better?

Pros: Puppets giving business advice. What could be better? Cons: You'll find yourself referencing the titles and songs for every possible social situation. After five years running in London's West End, some touring and some deserved rest the musical comedy Avenue Q is back in London at Greenwich Theatre. The show is the baby born from the genius of Broadway composers Robert Lopez and Jeff Marx, Lopez being no other than the hand behind the lyrics of the all-time record breaker film Frozen. Although there are no snowmen spontaneously bursting into song in this one, the musical holds some&hellip;

Don't waste your time with TV animation comedy; grab a ticket and enjoy the live music, outrageous lyrics, and buckets of humour this show brings to the stage!

User Rating: 2.37 ( 3 votes)
After five years running in London’s West End, some touring and some deserved rest the musical comedy Avenue Q is back in London at Greenwich Theatre.

The show is the baby born from the genius of Broadway composers Robert Lopez and Jeff Marx, Lopez being no other than the hand behind the lyrics of the all-time record breaker film Frozen. Although there are no snowmen spontaneously bursting into song in this one, the musical holds some pretty interesting, unexpected and sidesplitting numbers that are guaranteed to make your evening.

The characters in Avenue Q are a combination of hand puppets and some flesh and blood performers: on the fluffy side we have Nicky and Trekkie Monster under the hand of Stephen Arden, Tom Steedon as Rod, Jessica Parker and Arden as the Bad Idea Bears and the main protagonists and romantic element of the show Luce-Mae Sumner as Katie the Monster and Princeton, also played by Steedon. Playing equally colourful humans are Richard Morse, Jacqueline Tate and Elena Vincent.

The story’s premise is a familiar one amongst young adults, which, coupled with the show’s sense of humour, probably explains its popularity. When Princeton finishes university it’s time for him to head out into the real world and make a future for himself. The only problem is – the journey into adulthood is not as easy as one expects fresh out of academia, and he finds himself looking for an apartment in the more affordable part of town – Avenue Q. The neighbourhood provides the setting for the show, where we see Princeton battling with himself (and the Bad Idea Bears) in order to find his purpose in life, helped along by his eccentric new neighbours.

It all sounds sweet and innocent enough, but these puppets are not all they seem! It’s precisely the clash between the expected innocence and the raunchy reality of their actions, which creates the incredibly clever comic element. Avenue Q has often been described as the would be result of a steamy love affair between South Park and Sesame Street. The puppets are-out of this world crazy and you will end up loving every minute you get to spend with them. Some of the more notable musical numbers include titles likes, ‘Everyone’s a Little Bit Racist’, ‘The Internet is for Porn‘ and ‘You Can Be As Loud as the Hell You Want When You’re Making Love‘. It’s as awesome as all that.

The actors behind the hairy characters are remarkable both physically as puppeteers and vocally. They have to maintain the rhythm not only giving voice to their puppets, but also acting out their personalities (as much as you want focus on the character it’s hard to ignore the actor behind). Although these performances steal the show, it’s so much fun to see them interact with the breathing characters on stage – watch out for Christmas Eve!

This show is filled with the perfect combination of inappropriateness, humor and sweetness. It is such a clever critique of morality and social standards, race, growing up and even love. I’m serious when I say – this is much better than animated TV such as, The Simpsons and Family Guy, which have a similar genre of humour. If you add to the mix some live music to enjoy before the performance, a fantastic pub right next door and a nice stroll along the river for after, it turns out to be a pretty great night out at the theatre.

(The show does contain adult humour but there is no explicit age restriction, so parents may want to use their own discretion.)