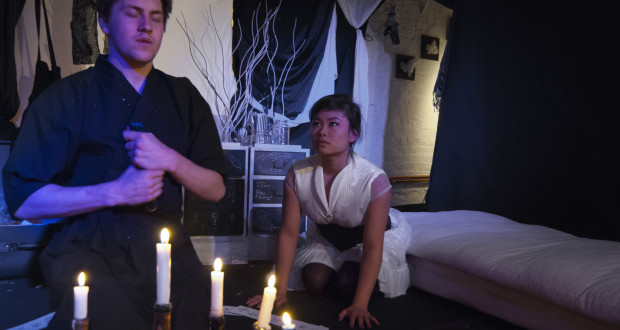 Pros: A variety of material through the evening allows the actors to display a lot of range.

Cons: Dragged a bit in some places; the conclusion of the third ring felt abrupt.
The Three Rings of Cirque Tsuki, Babel Studios – Review

Pros: A variety of material through the evening allows the actors to display a lot of range. Cons: Dragged a bit in some places; the conclusion of the third ring felt abrupt. The performer/devisors of ImmerCity have put together an intricately nested experience of stories within stories. Don't worry, it's less confusing than it sounds. Inevitably there were a few places during five hours of theatre where I found my attention wandering, but overall they've done a great job of creating enough small, different slices of things that there is a lot to discover during the night. The overarching story revolves&hellip;

Enjoyable, but it didn't make me want to run away with the circus.

The performer/devisors of ImmerCity have put together an intricately nested experience of stories within stories. Don’t worry, it’s less confusing than it sounds. Inevitably there were a few places during five hours of theatre where I found my attention wandering, but overall they’ve done a great job of creating enough small, different slices of things that there is a lot to discover during the night.

The overarching story revolves around a mysterious figure called the Shadowcaster, who has a circus where each new performer is assigned a “tarot card” which imbues them with certain characteristics. The circus is overseen by the two mysterious figures: the Lady Zed (Mei Mac) and The Great Zanagi (Hugo Nicholson), who have a secret that binds them together. Within this frame the evening is structured as three acts, Birthday, Feast and Parade. Between each act the audience is free to wander about, exploring bits of the circus tent and interacting with the performers.

Designer Clancy Flynn does very well with the small, limiting space at Babel Studios, making use of light and sound to reform the performance area into new guises throughout. For instance, much of Parade is in pitch black or lit by brief bursts of candle flame, which is really quite scary. Word of warning: it gets very humid and airless so do bring a hand fan if you have one. I, tragically, was wearing a woollen dress on the night I went; distinctly not recommended.

The circus is styled in a steampunk-ish Victorian themed black-and-white. This – in addition to the sinister magician / duelling lovers themes – means that the production is similar to Erin Morgenstern’s novel The Night Circus, so much so that I was surprised to see no mention of these similarities in the program notes. While the styling and plotting are enjoyable, if you’ve read Morgenstern’s novel it will be hard not to feel like you’re walking into a pared-back invocation of the circus in the book. I’ve no idea whether this is a coincidence or whether ImmerCity intentionally based parts of Cirque Tsuki on The Night Circus.

Birthday, the most family-friendly piece of the night, is a retelling of Little Red Riding Hood narrated by the superb Madame Mist (Emily Hodgson), with “living doll” Tiffin (Millicent Wilkie) taking the part of Little Red and Hugo Nicholson enacting the wolf. At first I didn’t think he was a particularly frightening wolf but, later in Parade Nicholson has a much more disquieting role, making it clear that the level of scariness in this one is being pitched for the kids in the audience.

The second act, Feast, is a rather complex interpretation of the story of Scheherazade (Emily Hodgson again) and the Thousand and One Nights. As there are several stories inside this story, including a gender-swapping version of Aladdin and the Lamp, Hodgson, Nicholson and Mac go through a hilariously dizzying range of quick character changes. This was my favourite ring of the night for overall hijinks.

Finally, Parade is a ghost story based on the Japanese myth of Izanami (Mac) and Izanagi (Nicholson), two warriors so well matched that they fall in love and run away. The main story collides with the inner stories in this one. There’s a trip to the underworld and some vengeful ghosts and general all-around sinisterness. This was definitely the most compelling act of the evening – I was holding my breath through parts of it. A really successful element of this act is how invested you’ve become in the characters by seeing them in very different guises earlier on.

I did find the end of Parade rather abrupt, because we really only see a resolution for two of the characters and there’s no epilogue for the rest of the cast. A final flourish to draw the whole evening together would have been a nice touch. Nevertheless I found myself mulling over different aspects of the evening long afterwards, which is always the sign of an impressive performance.