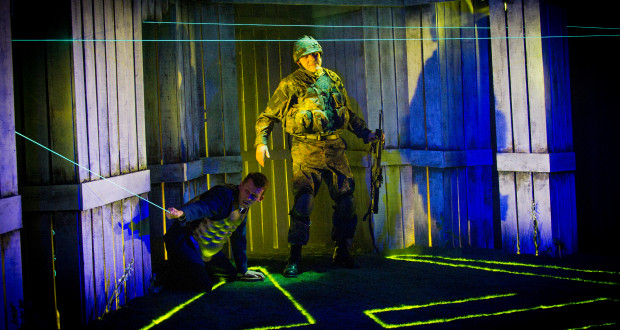 Pros: Excellent interpretation of Greek myth with a believable cast and relatable dialogue for a young audience. Slick stage presentation.

Pros: Excellent interpretation of Greek myth with a believable cast and relatable dialogue for a young audience. Slick stage presentation. Cons: Cramped and uncomfortable seating for adults with children but that’s a minor quibble. Follow the line of chattering children down the Broadway in Wimbledon and you’ll find yourself at The Polka Theatre, a venue which is attempting to do for theatre what Harry Potter did for reading. Judging by the packed crowd while I was there, it’s succeeding. The wonderful thing about the Greek myths is that they give plenty of scope to inspire fertile imaginations. The bottom&hellip;

A treat for any young person with a vivid imagination.

User Rating: 4.13 ( 2 votes)
Follow the line of chattering children down the Broadway in Wimbledon and you’ll find yourself at The Polka Theatre, a venue which is attempting to do for theatre what Harry Potter did for reading. Judging by the packed crowd while I was there, it’s succeeding.

The wonderful thing about the Greek myths is that they give plenty of scope to inspire fertile imaginations. The bottom line is they are just great stories. There’s the one about the man who flew too close to the sun, and the one with the many headed serpent. Then there’s the one about escaping the underworld. The stories of Icarus, The Hydra and Orpheus are fantastical, and definitely worth telling to the Game of Thrones generation. Now, to help you brush up on your mythology, the Minotaur was half-man half-bull and lived in the Labyrinth. The son of King Minos had been killed by Athenians. So Minos built the maze and put the Minotaur in to devour the young men of Athens and avenge his own son’s death. This is the setting for the legend of Theseus and The Minotaur.

Now flash forward to the 21st century where a boy, Freddie, receives a dozen or so text messages from his father, a soldier, who is overseas. The text messages make no sense, his dad is asking for help, and he can’t explain them to his mum. A strange woman appears with her even stranger henchman. They claim Freddie has to travel into the past to fulfil his destiny and the prophecy. Freddie wisely says “it’s my birthday and this is 2014 – we don’t do prophecies”. However his mum explains what’s happening and Freddie begins a journey to the past in order to protect his future. Freddie becomes Theseus, whose task it is to slay the Minotaur. He must overcome a number of challenges before he even gets to the labyrinth and help his father. Along the way he meets (and is rather taken with) The Gypsy Queen, who can see his future.

There’s plenty of room on stage for well-choreographed fights and lots of running around. The set moves smoothly between scenes and the labyrinth is neatly negotiated. The lighting and music set the tone perfectly and there are good technical effects for various voices and echoes.

You’d think a theatre full of 8-14 year olds and their parents would be noisy with people shuffling about, bored. Thankfully this performance is so captivating you could hear a pin drop. Some members of the cast prove their versatility by taking on multiple roles – including a pig that likes cheese and pickle sandwiches – and the main leads are convincing enough to make the myth come alive. The script is relatable and easy for young minds to follow. And that’s the key. The theatre has an adventure playground and a café where the seating is done in booths like train carriages. A lot of thought has gone into making the whole experience enjoyable for young minds.

Minotaur is a delight and a great treat for the Easter holidays. Timed at just over an hour, it is pitched perfectly to avoid restlessness and boredom. A good twist on an epic story equals happy children asking for books of Greek stories to read at bedtime.

Paul spends most of his life in the dark either watching films or at the theatre. When he isn’t in the dark he can be found reading books, eating cake and watching cricket - usually at the same time - listening to opera, The Handsome Family and The Ramones. He has a passion for the Arts and has been working in radio so long he remembers when a crystal set had nothing to do with Breaking Bad.