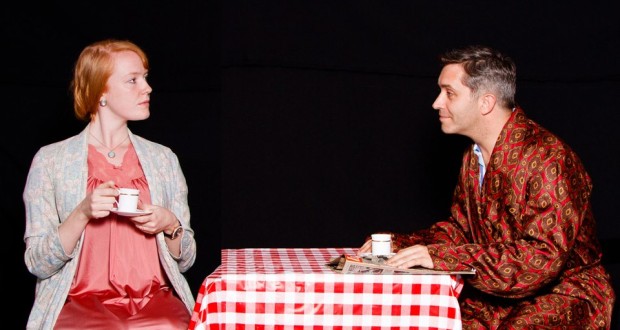 Pros: Good writing, better performances. Cons: A little cheesy here and there. This is going to be a positive review (spoiler alert) but I’m going to start it off with a moan. Please indulge me this London whinge, it will be brief: trying to navigate the road works around Victoria on Monday lunchtime is an absolute nightmare. There was a moment when I was waiting for a cement mixer to pass on Buckingham Palace Road with mere minutes to spare before the curtain went up. I cursed whoever decided to start a show at 1pm on a Monday, but&hellip;

This is going to be a positive review (spoiler alert) but I’m going to start it off with a moan. Please indulge me this London whinge, it will be brief: trying to navigate the road works around Victoria on Monday lunchtime is an absolute nightmare. There was a moment when I was waiting for a cement mixer to pass on Buckingham Palace Road with mere minutes to spare before the curtain went up. I cursed whoever decided to start a show at 1pm on a Monday, but an hour later I felt very different.

I still can’t decide whether staging four short plays at lunchtime is actually a good idea, but it was certainly well executed. The hour was split up into four plays, or ‘courses’: starter, main, dessert and coffee, and it was a BYOP affair (that’s Bring Your Own Picnic).

The first play (Gareth Brierly’s Nice People) fell into the trap that many short plays succumb to. It was a deeply contrived One Twist Wonder that aimed to get by on its surprising plot twist alone. The play wasn’t helped by unnecessarily over the top performances delivered at a thousand words per minute.

However, the quality of the work only got better as the hour wore on. Up next was Nicole Ollivère delivering a convincing monologue as an increasingly frazzled teacher. Ollivère came across as completely natural, giving a real sense that the class she teaches are concrete characters. It was powerful but subtly so, with the somewhat racy story eked out slowly and carefully with emphasis placed on deliberate momentum over shock factor. Plus, I admired the fact that writer Gina Schien had managed to avoid that painful device of a character repeating everything an offstage/imagined character says in order to relay it to the audience.

The third piece, Tell Someone Who Cares (by Sarah Browne) was far less subtle but the performances of Tegen Hitchens and Louise Fairbrother triumphed over a slight brashness in the writing. The play made of use of the theatrical convention of asides so each of the characters could tell the audience what they really thought of each other. The self-awareness the characters (on the surface, vacuous Essex girls) had about their own states of psychological ill-repair proved a source for comedy and although some lines were a little obvious, the comedic timing of the actors made it work. The play’s conclusion fell a little flat, and didn’t really give the closure I was hoping for but it was a tasty dish nonetheless.

The hour finished on what was probably the best short play I have seen in a long time, maybe ever. Undress Me Clarence by Doug Grissom showed the struggles of a very English (read: uptight) married couple trying to spice up their stale sex life with dirty talk. Clarence (Alexander Hathaway) reluctantly describes undressing his wife (Cassandra Foster), under her strict guidance. Though the play is funny, it never goes for the cheap laughs (with the erotic subject matter, there are plenty to be had). Although the action entirely takes place in fantasy, described at length whilst the two characters sit at the breakfast table, it never feels dull. The piece ends with a truly touching moment of Clarence seemingly falling in love with his wife all over again, before losing his nerve and leaving her cold, naked alone. That is metaphorically naked of course; this was lunchtime!

If you have the luxury of an hour to spare in the middle of the day this week, I would recommend you spend it watching Lunchtime Fourplay – bring along some sandwiches, and a healthy theatrical appetite.

Previous: The Chickenshed Theatre: Artistic Diversity at its Best
Next: Playground New Writing Night, The Horse and Stables – Review