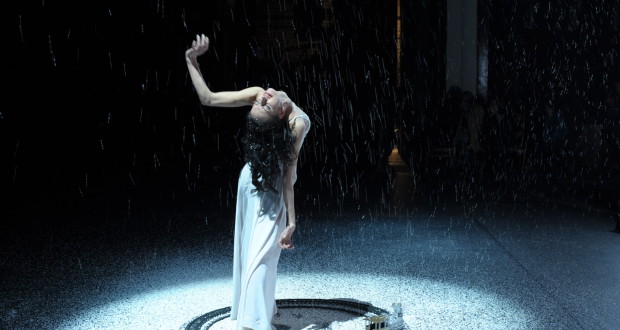 Pros: An intense and thrilling ballet with incredibly athletic and passionate performances, which leave you in a state of awe.

Cons: The focus on the love triangle means that the show lacks links to the Russia that Tolstoy was at pains to describe in his novel.
Anna Karenina, London Coliseum – Review

Pros: An intense and thrilling ballet with incredibly athletic and passionate performances, which leave you in a state of awe. Cons: The focus on the love triangle means that the show lacks links to the Russia that Tolstoy was at pains to describe in his novel. Attending the ballet is a rare event for me, and has mainly consisted of a trip to see The Nutcracker at Christmas.  I was therefore very excited to be given the opportunity to review Anna Karenina at the London Coliseum.  This was definitely a glamorous night out.  I had a great seat in the&hellip;

A physically impressive and atmospheric ballet. Deviates from Tolstoy's classic to concentrate more on the love triangle between characters.

User Rating: 3.55 ( 1 votes)
Attending the ballet is a rare event for me, and has mainly consisted of a trip to see The Nutcracker at Christmas.  I was therefore very excited to be given the opportunity to review Anna Karenina at the London Coliseum.  This was definitely a glamorous night out.  I had a great seat in the stalls and was surrounded by extremely well dressed Russian audience members. The bar in the interval resembled a show at London fashion week.  The venue itself is of course incredibly opulent.  The London Coliseum was built in 1904 with the vision of being the ‘people’s palace of entertainment’. With 2,359 seats it is the largest theatre in London and with such a huge and grand auditorium and richly decorated interior, the venue itself is an integral part of the experience.

The music for Anna Karenina is a selection of works by Tchaikovsky. Unfortunately there was one particularly dramatic moment that I felt suffered because of the use of the Romeo and Juliet Overture, and it was hard to take seriously as it has been used for so many television programmes and films, from Columbo to Sponge Bob Square Pants. With the opening chords of Tchaikovsky’s Serenade in C major, we are quickly plunged into a world of passion barely contained by the constraints of society.

After a brief tableau introducing the upper class world of Anna, her husband Karenin and her young son, we enter into a world where love and desire are expressed in frenzied and violent terms.  On discovering his wife has been unfaithful, Karenin rapes her and the dance becomes a series of the most jagged and contorted movements that are painful to watch.  As Anna becomes more and more obsessed with her lover, she is laid bare before us, her movements becoming ever more desperate and at times insect like.  We see her abandon her son and give her self up to ecstasy and despair, culminating in the impressive suicide scene with the ensemble powerfully depicting the train.  One of the main criticisms of Eifmans Ballet is that the representation of love and passion is a cliché and that the finer subtleties of feeling and nuances in the famous story are not shown.  Maybe this is so but you cannot deny the thrill of watching this highly charged, and what looks like physically impossible dancing without being in awe of these amazing, statuesque dancers.

This ballet is an amazing visual experience.  It explores the unravelling of Anna Karenina through her passion for Vronsky, leading to her ultimate destruction. Taking as its source what is arguably one of the most famous exports of Russian literature, the ballet is being performed by the Saint Petersburg Eifman Ballet and is part of the UK-Russia Year of Culture 2014, organised by the British Council and the Russian Ministry of Foreign Affairs. Eifman founded the company in 1977 and is one of Russia’s most popular choreographers and for a period of time was the only high profile modernist Soviet choreographer.

Though audience members familiar with the novel may think they know what to expect, the ballet offers a very pared down version of Tolstoy’s work, concentrating purely on the love triangle involving the three main characters; Anna (Yulia Manjeles), her husband Karenin  (Oleg Markov) and her lover Vronsky (Sergey Volobuev). There is little to link it to the Russia that Tolstoy was at pains to describe in the novel Anna Karenina, which in my opinion is a shame.

The setting too gives the show a level of intensity but loses the description of Russian life, which is so important in the book. The minimal but elegant set design is well complemented by the costumes and the lighting design adds much to the atmosphere, especially the scene where Anna and Vronsky dance alone in their separate bedrooms and each are dramatically lit in turn whilst performing a dance of longing for each other.