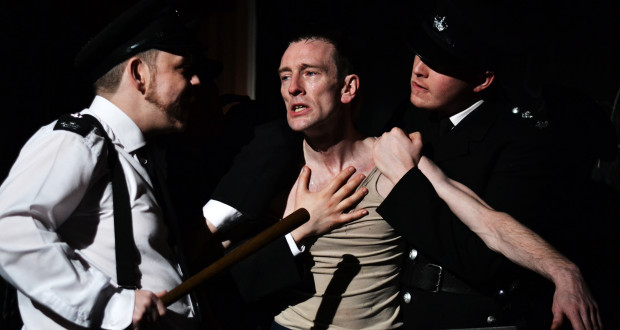 Pros: Martin Docherty is outstanding as torturous Scottish gangster Johnny Byrne. Cons: Some elements feel unnecessary to the overall story. This is not a play for the feint of heart – it is a very heavy production. It deals with excessively violent imagery and gore as well as difficult to watch scenes of sexual assault. The acting is outstanding, and this extremely well-written play leaves many hard social truths to be examined and considered. The setting is Glasgow in the early 60s and we meet Johnny Byrne—a young man who, with his mates, lets boredom lead to a life&hellip;

A well-executed piece that blurs the lines between good and evil.

This is not a play for the feint of heart – it is a very heavy production. It deals with excessively violent imagery and gore as well as difficult to watch scenes of sexual assault. The acting is outstanding, and this extremely well-written play leaves many hard social truths to be examined and considered.

The setting is Glasgow in the early 60s and we meet Johnny Byrne—a young man who, with his mates, lets boredom lead to a life of petty crime. This soon escalates to more grown-up violence. Johnny talks to us as he is imprisoned, and flashbacks show us the path he went down to end up in jail.

It’s thoroughly authentic, and the strict Glaswegian accents can be a wee bit tricky to follow, particularly if you, like me, are a bit of a foreigner—at one point I was sure Byrne said he was in prison for ‘mother’ – in fact, it was ‘murder.’

The atmosphere and staging adds a lot to the performance. The stage is blacked out and covered with graffiti consisting of lurid chalk scrawls. Characters smoke, frequently, and the smell of stale smoke hangs in the air. The small room occasionally smells like a latrine – unless my imagination is that convinced that it should smell that way, and made it up on my own.

The acting and handling of the roles is well done. 24 roles are split between 7 actors— changes of costume allow for them to convincingly switch from one character to another. Ruth Milne is brilliant as Carole, the abused girlfriend of Byrne. Naïve, yet mouthy, she is wonderful when baiting Byrne into a rage and then immediately flinches and recoils as she retreats into being a victim to his violence.

The true star of the show is Martin Docherty as gangster Johnny Byrne. Byrne is an animal; he is a fireball of rage and aggression, and one that shows no sign of slowing or calming down. He rages, and every vein in his neck bugles. His rage borders on madness, but you don’t see a reason for him to be able to, or motivated to, stop his behavior.

Anger and violence are what he excels at; there is no hope for anything else—yet just as soon as you would condemn him to being evil, we’re introduced to sadistic Prison Officer Paisley (an eerie and horrific Ross F. Sutherland), and suddenly the audience is unsure what side of the prison cell the evil is on. Is it locked in the cage, with the animal, or is it roaming the halls of the prison using deadly and sadistic cruelty as an abuse of power? It’s compelling food for thought, as are the scenes of sexual assault which elect a strong sense of sympathy for a murderer.

There are many strengths in this production, but there are some brief distractions which detract from the impact of the piece. The flashbacks to the boys as youngsters feel a bit slapstick and out of place in such a brutal production, although their inclusion is necessary for the haunting rhyme. That the second half is narrated by a prison janitor seems odd, particularly as the first half moves along well just by Bryne’s monologues.

This is a brutal production, but it is also an excellent one, and will certainly leave audiences both repelled and drawn in to such a violent and thought provoking evening of theatre.