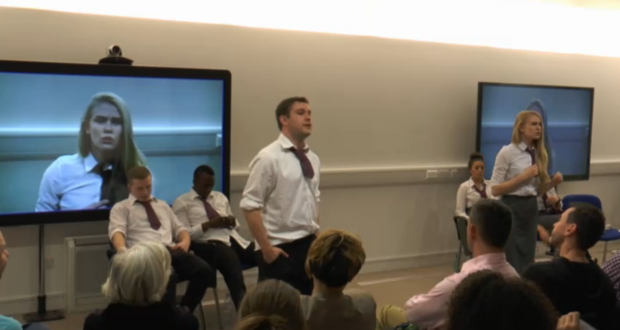 Pros: Sket approached its subject matter with a bravery, humour, sensitivity and maturity that moved me more than anything I’ve seen in a long time.

Cons: The performance was immaculate but it didn’t start on time. That is my only gripe.
Sket, Burrell Street Sexual Health Clinic – Review

Pros: Sket approached its subject matter with a bravery, humour, sensitivity and maturity that moved me more than anything I’ve seen in a long time. Cons: The performance was immaculate but it didn’t start on time. That is my only gripe. Visiting a sexual health clinic on a weekday evening isn’t something I make a habit of, but given that Guy’s and St Thomas’ had lent the venue to Liminal Space Productions I was happy to make the trip: and it was worth it. Sket is the latest creation from comedic writer and actress Maya Sondhi – who has&hellip;

Sket is an exceptionally well written, smart piece of theatre that made me laugh out loud and nearly brought me to tears. I will be first in line to get tickets for Maya Sondhi’s next play; get out my way.

User Rating: 4.9 ( 1 votes)
Visiting a sexual health clinic on a weekday evening isn’t something I make a habit of, but given that Guy’s and St Thomas’ had lent the venue to Liminal Space Productions I was happy to make the trip: and it was worth it. Sket is the latest creation from comedic writer and actress Maya Sondhi – who has participated in the BBC’s Writersroom – and is bursting with amusing remarks and observations of human behaviour. But though it is boldly funny, it is its bold treatment of the issues facing young and vulnerable people today that makes Sket an outstanding drama.

The play told the story of two young (under 16) friendship groups – 3 girls and 3 boys – navigating relationships and building their own sexual identity in a culture where pornography is readily accessible, and the social memory of technology takes a snapshot of their every sin and cruelty. The female section of the cast each engage in sexual acts that are caught on camera or worse, and in consequence are rejected by their peers, and labelled ‘skets’.

Motivated by fear and goodness knows what else, the boys goad one another to deceive their female schoolmates and film more and more gross acts. Written with care, the script slowly escalated the severity of the sexual acts discussed, building tension and heightening emotion with immense skill. I was laughing at first, but as time moved on I felt the life draining from me: the same way I feel watching Schindler’s List or reading Primo Levi, they are terrifying but brilliant for articulating the things we don’t want to think about but should.

The direction and set were simple but alarmingly effective. The actors sat in schoolroom chairs when ‘out’ of the scene and simply stood in front of the audience when ‘in’, backed by a screen. The only props in use were appropriately mobile phones and video, used to good effect to highlight the unnaturalness of the character’s relations with one another, and themselves. None of the sexual or criminal acts referred to were performed; the writing and acting were of such high quality that the retelling was enough to shock the audience. Subjects such as rape and violence, especially in relation to children, are harrowing, and when spoken of in performance by the enormously talented Lee Hunter (‘JC’) and Olivia Onyehara (‘Tamika’), they made my head reel and my stomach turn.

All of the cast performed without flaw, and the accents and use of slang were convincing, put to good humourous effect; most especially in the short scenes set in detention, that engaged the children in conversation with their teacher (Kandy Rohmann). These scenes allowed the younger characters to reveal those things that they couldn’t in front of their peers, and these heartfelt revelations criticised contemporary fixations on the superficial. The play was admirable for the fact that it didn’t assign its characters to any particular school, locale or region of the UK; this was appropriate given that in reality the issue is not restricted to inner cities or low income families, as some may assume.

This play is the best I’ve seen all year (yes I know it’s only March), and I spent the rest of the evening talking to my parents and my boyfriend about the social issues it had raised. What struck me most was the completely unsexy nature of everything the characters were doing, or forced to do. Gratification wasn’t really a consideration, and the motivations appear dark and complicated. The answer to the social and cultural problems examined in Sket I cannot provide; for that you should talk to Brook.org.uk or Teen Boundaries. What I do know is that Maya Sondhi and Liminal Space Productions created something brilliant, and I was lucky enough to see it.