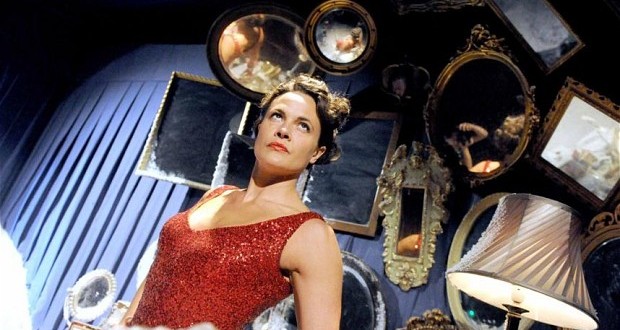 Pros: Astonishingly beautiful and detailed sets that the audience can explore freely.

Cons: It’s not easy or perhaps even possible to piece the story together. And, this feels like quibbling, but I found the face masks audience members are required to wear uncomfortable.
Punchdrunk: The Drowned Man, Temple Studios – Review

Pros: Astonishingly beautiful and detailed sets that the audience can explore freely. Cons: It’s not easy or perhaps even possible to piece the story together. And, this feels like quibbling, but I found the face masks audience members are required to wear uncomfortable. In The Drowned Man, Punchdrunk has created a fully-realized world of faded Hollywood glamour, populated by young starlets, high-powered executives and seedy cowboys. For readers not familiar with this talked-about theatre company, Punchdrunk is a pioneer in ‘immersive’ theatre. Their sets are essentially enormous art installations, in which the audience is permitted to wander freely, catching&hellip;

This is a spectacular theatrical experience like no other. Go, go, go!

In The Drowned Man, Punchdrunk has created a fully-realized world of faded Hollywood glamour, populated by young starlets, high-powered executives and seedy cowboys. For readers not familiar with this talked-about theatre company, Punchdrunk is a pioneer in ‘immersive’ theatre. Their sets are essentially enormous art installations, in which the audience is permitted to wander freely, catching fragments of a multi-layered narrative as it unfolds. For their latest production, Punchdrunk has taken over a disused building next to Paddington Station and transformed it into Temple Studios. The year is 1962, and the studio is about to celebrate the wrap of their final picture, The Drowned Man.

Before entering the set, we were given white face masks to wear for the duration of the three-hour performance. I must admit I found wearing the mask a bit claustrophobic, but I can appreciate its use in transforming me into an anonymous citizen of an imagined world. After being taken up in a lift by a glamorous starlet, we were let loose to explore the massive multi-story building, following whichever characters we chose, or setting out alone. Audience members are encouraged to separate from their friends so that they can have a truly unique experience.

The star of this show is, without a doubt, the unimaginably vast and astonishingly detailed set. Designers Felix Barrett, Livi Vaughan and Beatrice Minns have created a nightmarish vision, full of dark and erotic imagery. There are elaborate film sets, a creepy forest, a decaying chapel, a Wild West saloon where you can sit and have a drink. Wandering through the set is not unlike being inside a haunted house. The lighting is very dim, masked faces peer around dark corners, and the soundtrack alternates between sinister, pulsating white noise and period pop music. The level of detail present in every environment is astounding: wardrobes full of clothes, lipstick on vanities, long handwritten letters, 1960’s magazines to flip through. Sealed letters can be opened and read, beds can be lay on.

A cast of forty plus populate Temple Studios. Most are trained dancers and there are many brilliantly choreographed group dance numbers, fight sequences, and love scenes. The production invites you to spy on scenes of a very intimate nature. The word ‘voyeurism’ is bandied about a lot these days, but here it is truly apt. The actors often act as though they do not see the masked figures, but sometimes they break this contract and involve audience members in the action. The production constantly blurs the boundary between illusion and reality. This is a show where the traditional actor/audience boundary has vanished, which is set in a movie studio, where the ‘fake’ sets of Temple Studios fade into the sets Punchdrunk have created. The number of reflecting mirrors can make you dizzy.

There is a story, apparently loosely based on Georg Büchner’s Woyzeck, but I wasn’t able to follow it. The synopsis handed out before the performance explained the basics: parallel storylines of adulterous affairs that end in murder, but there are countless other stories waiting to be discovered. As a nomadic audience member, you catch only evocative fragments. I’m not sure it’s possible to piece together the entire story, and I can imagine that those who crave a linear narrative might find the experience frustrating. It is also difficult to engage emotionally with characters that you see only briefly. And yet I felt that it didn’t really matter, so special was the opportunity to inhabit and explore a foreign world.

Since watching The Drowned Man, its images have continued to haunt me. It is a hugely impressive achievement and I have never experienced anything like it.