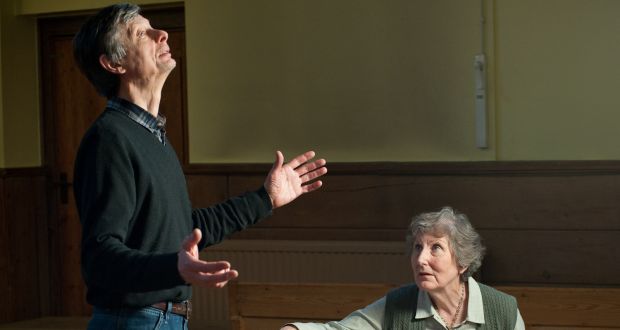 Pros: Thought-provoking perspective, some good performances and poetic language. Cons: The story takes a long time to develop. An austere, dimly lit set of arches and benches captures the heat and lethargy of a time in Spain when smoke fills the air with the Spanish Inquisition at its peak. The set contrasts with the rich velvet costumes and equally vivid language. Don Carlos, played by Mark Lisseman, and Doña Rosario, played by co-director Rachael Maya, quietly open the play with an evocative description of a burning as the Inquisition has found more heretics. Their scene flips back and forth&hellip;

A thought-provoking exploration of a dark period of history. Beautiful new writing that could do with some editing and restructuring.

An austere, dimly lit set of arches and benches captures the heat and lethargy of a time in Spain when smoke fills the air with the Spanish Inquisition at its peak. The set contrasts with the rich velvet costumes and equally vivid language. Don Carlos, played by Mark Lisseman, and Doña Rosario, played by co-director Rachael Maya, quietly open the play with an evocative description of a burning as the Inquisition has found more heretics. Their scene flips back and forth with another between a middle-aged priest Don Domingo (Peter Saracen) and his elderly mother, Doña Isabella (Rosemary Macavie). Both scenes reflect on past choices and lost loves with little attention on the present. It is as if they are all waiting patiently for the end of their lives. The whole of the first act provides the audience with character exposition, but nothing progresses until much later in the play. Although playwright Tilo Ulbrecht expresses himself beautifully through the language, this part of the play could be drastically trimmed in order to focus more on the latter acts, rather than the prologue-like first.

From Act II, set five years later, the story begins to progress. The action is set in the house of Don Felipe (Nick Simons), a very old blind man. He is a Cathar, a branch of Catholicism deemed heretical by the medieval church. He hides in plain sight as the audience learns that his dear friend and former student Don Carlos is the new Inspector General of the Inquisition. The other characters are Cathars as well and the action finally starts to pick up the pace when reports of a stranger and two followers healing the ‘village idiot’ ignite suspicion that there are more members in hiding. The play ends with Don Domingo forced to make a devastating decision.

The performances are largely good, with excellent work from Macavie and Simons. It is incredibly refreshing to see a cast of older actors in fringe theatre rather than 20-somethings playing at being old. Maya is also a force of calm strength that is lovely to watch. Saracen is good as the conflicted Inspector but his moments of anger are difficult to find convincing. Gaoler Bernard O’Sullivan provides some light relief and good contrast to the heavy content of his scenes.

Much of the first act could do with editing and condensing however. The subplot of The Stranger ended with a scene where Don Domingo gets to meet him and his followers, but it does not work. They have a much more powerful influence unseen and their effect on Don Domingo is not particularly believable. The characters are well developed and Ulbricht skillfully uses language to create atmosphere, but the plot is somewhat neglected. The play as a whole certainly has potential, but needs re-structuring. The story is a great idea and it gives a very personal humanity to a period of history associated with the devastating capabilities of the Spanish Inquisition. Although we may disagree with Don Domingo’s agonizing final decision, we can certainly find empathy with his suffering and commend the peaceful tenacity of the Cathar characters.