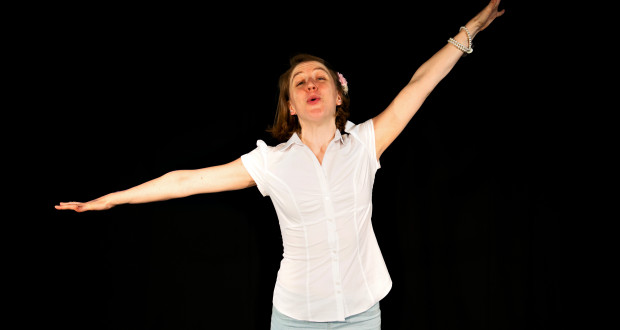 Pros: A captivating and emotionally nuanced one woman performance.

Pros: A captivating and emotionally nuanced one woman performance. Cons: The production let me feeling cold – grim fascination isn’t always enough. You may prefer your theatre a little brighter. Winner of a coveted Scotsman Fringe First Award, Dark Vanilla Jungle was a smash hit at last year’s Edinburgh Fringe. This highly anticipated London transfer sees it reprised at the Soho Theatre. No matter what you are seeing, a general plus for the Soho is that its Front of House bar is always buzzing, making it one of the best places in London to kill time soaking up the&hellip;

No matter what you are seeing, a general plus for the Soho is that its Front of House bar is always buzzing, making it one of the best places in London to kill time soaking up the atmosphere along with a pre or post theatre drink. Known for being at the forefront of promoting new work, an integral part of the Soho’s charm its quick turnaround of fearlessly edgy, often transgressive, contemporary theatre, comedy and cabaret. In this respect Dark Vanilla Jungle has found its rightful home.

The show is currently running in the smaller upstairs theatre on the third floor. Having only seen comedy there previously I was expecting something impressive by way of set design. Instead I was met with the familiar wall to wall black, making for a sobering entrance as I shuffled to my seat.

In retrospect the starkness was apt for such a dark play and served to heighten the raw emotionality of this one women performance. Gemma Whelan’s portrayal of physiologically and sexually abused 15 year old Andrea is so accomplished and visually arresting that you can scarcely look away during the play’s 75 minutes, though there were times I wish I could.

Philip Ridley’s ability to unnerve his audiences is his strong suit and allows Whelan’s immense range to come to the fore. The multiple plot lines, disjointed narratives, internal monologues and flashback sequences are deftly crafted in the best tradition of postmodern theatre. It starts out simple enough: whilst recalling the idyll of her childhood, Andrea is exuberantly joyful and her innocence raises some laughs. When she suddenly snaps to reel obscenities in darkly aggressive tones it’s startling and unexpected.

There’s something sinister about Whelan’s Andrea from the off. Even with her Home & Away style lilt, smiling face, Top Shop outfit and school yard gawkiness she’s not fooling anyone. She’s a delusional grown woman in a perpetual state of childhood, or inversely a child old beyond her years. She talks about eating ice cream one minute, then rhapsodises about sex and boys the next. She flits between these imaginary states of frivolity and then sears with rage with increasing urgency as the play unfolds, horrifically.

I felt the way the writer tackled themes of mental illness, sexual and physiological abuse and rape was gratuitous and crass. I don’t believe that these issues need always be tackled with searing earnestness, but they are used far too often as shorthand for descents into madness in a way that has now become trite.

Andrea is a savage Frankenstein monster of abuse, the play like a catalogue of tabloid stories meshed into one. Too we often lose our sense of shared humanity amid the bombast of trashy headlines. Reading between the lines, the play is a good reflection of its genre and our times. Though the acting was enthralling, and the writing on the subversive side, on this occasion it left me cold.