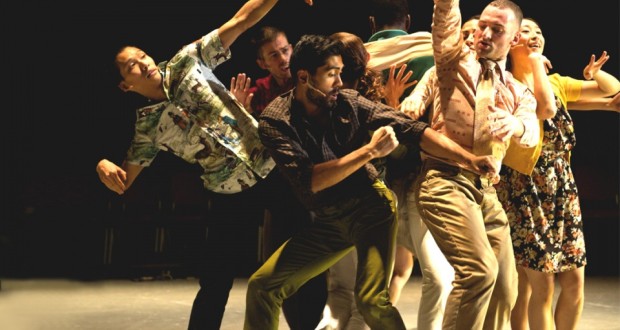 Pros: Performed in the round, the dance was perfectly accessible to the audience, and beautiful to watch thanks to the marriage of choreography and the spoken word.

Cons: Rather than encouraging self-exploration of the misconceptions surrounding immigrants, Border Tales impressed a sense of guilt upon those people sitting on its very own stage borders.
Border Tales, The Place – Review

Pros: Performed in the round, the dance was perfectly accessible to the audience, and beautiful to watch thanks to the marriage of choreography and the spoken word. Cons: Rather than encouraging self-exploration of the misconceptions surrounding immigrants, Border Tales impressed a sense of guilt upon those people sitting on its very own stage borders. This is not the first time I've seen dance used as the artistic framework to explore the nature and concept of identity. Luca Silvestrini's Border Tales is a multi-dimensional piece constructed using movement, theatrical performances, and interaction with the audience. It brings together the cultural&hellip;

An extremely relevant study on the nature of identity using choreography as the main artistic framework of exploration. Particularly interesting in the light of today's political conflicts and the re-examination of UK immigration laws.

This is not the first time I’ve seen dance used as the artistic framework to explore the nature and concept of identity. Luca Silvestrini’s Border Tales is a multi-dimensional piece constructed using movement, theatrical performances, and interaction with the audience. It brings together the cultural and social misconceptions of being a foreigner in the UK and beyond, looking at the life experiences of the ‘other’, as they are referred to in the piece.

The exploration of identity (and more specifically, the conflicting factors within interracial identity) draws from both the personal narratives of people interviewed by Silvestrini at the Islington Centre for Refugees and Migrants, and the experiences of the dancers and performers of the piece. The dance company, Protein Dance, brings together artists from all over the world to present stories that show the reciprocal relationship between a person and his or her social, cultural and ethnic environment. The female lead Yuyu is born of parents from China and Taiwan. Performer Eryck Brahmania was born in Essex of Philippine and Indian parents, and co-star Femi Oyewole was born in Nigeria but brought up in London, therefore this is an authentic cultural collaboration in more ways than one. The main cast of eight examine through the lens of choreography what it means for them to be torn between the frontiers existing within themselves and the outside word.

The massive dance space at The Place, a contemporary dance centre inconspicuously hidden next to Euston Road, was used ingeniously in consideration of every member of the audience’s aspect of the square set-up. The dancers moved to face and interact with every side of the stage with visceral, intense and sometimes raw choreography. The piece incorporated segments from traditional dances from all over the world, alongside new and innovative elements of modern and experimental movement. Above all, it brought out an overwhelming wave of energy and emotion from the cast that left no one untouched.

The combination of movement and the spoken word guided the audience through the ideas behind the piece, as told by the different performers; but it also left us to our own devices when it came to interpreting the feelings the dance sections evoked. However, the guilt that came out of the storytelling was so powerful, so palpable, that it felt somewhat accusatory to myself as an audience member. I felt the audience should have been allowed to discover and evaluate their part in the message transmitted without the actors directly placing everyone in the spotlight of blame.

Anthar Kharana provided the magnificent musical accompaniment (composed by Andy Pink) using all sorts of instruments, chief of them the drums. It was an overpowering and fierce sound, that was exhilarating to watch the dancers move to. Kharana also incorporated vocals reminiscent of his native land Colombia, and was joined occasionally by dancer Salah El Brogy. The music was combined with games of dimming light, that created a supernatural aura in The Place.

Listening to sounds from Colombia and Egypt rising up in volume; seeing dancers from all over the world belonging to so many places; seeing them create a choreography rich in identity and uniqueness; and seeing that richness develop from the very richness of the dance company’s characters and identities is something I think you won’t want to miss. Silvestrini and Protein Dance appeal to our instinctive understanding of the topic to create a production that shines with universality.

My personal opinion is that frontiers are geographical lines created from our desire to belong, and the piece brought that out for me. Whether you are a native of your country or an ‘other’, thanks to the twist at the end of the performance Border Tales has a message to give that we can all identify with.