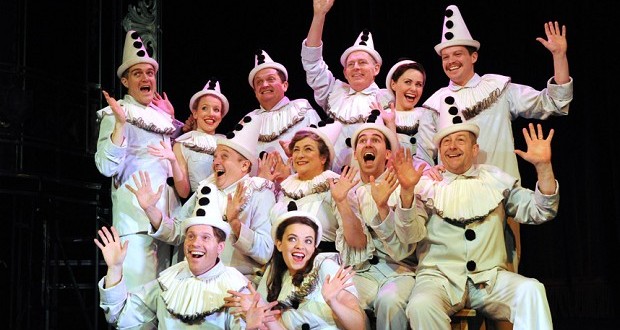 Pros: A powerful piece about the atrocities of war.

Cons: If you’re Michael Gove you won’t like it.
Oh What A Lovely War, Theatre Royal Stratford East – Review

Pros: A powerful piece about the atrocities of war. Cons: If you’re Michael Gove you won’t like it. It will probably not have escaped your attention that we have a very special anniversary to ‘celebrate’ this year: the centenary of the First World War. Cinemas, TV stations and theatres will without a doubt provide their audiences with plenty of opportunities to look at ‘the war to end all wars’ from every possible perspective, but already it’s hard to imagine they’ll be able to deliver a piece that’s more poignant and hard-hitting than Terry Johnson’s revival of Oh What A&hellip;

You’ll laugh, you’ll cry. Go and see it, but not after a bad day at work.

It will probably not have escaped your attention that we have a very special anniversary to ‘celebrate’ this year: the centenary of the First World War. Cinemas, TV stations and theatres will without a doubt provide their audiences with plenty of opportunities to look at ‘the war to end all wars’ from every possible perspective, but already it’s hard to imagine they’ll be able to deliver a piece that’s more poignant and hard-hitting than Terry Johnson’s revival of Oh What A Lovely War.

The original production was developed fifty years ago by legendary British theatre maker Joan Littlewood and her actors at the Theatre Workshop. Back then, the ground-breaking show was met with enthusiasm and outrage in almost equal measure. If anyone on the production team today had had any fears that half a century later its ability to cause controversy had diminished, they needn’t have worried: Michael Gove was very obliging by calling it a source of ‘left-wing myths’ and thereby reminding us why we still need shows like this today.

Oh What A Lovely War traces the course of the Great War through a series of mostly unrelated scenes and songs. The actors, dressed up as pierrots, play generals, soldiers, and civilians from pretty much every nationality involved with the conflict, usually by simply changing hats or sticking on a fake moustache. To further enhance the vaudevillian feeling of the show, the performers are directed by an unnamed ringmaster. The first act is funny, somewhat sentimental, and surprisingly light-hearted. Just before the interval however, it becomes clear that the jokes and the cheery songs were all part of an elaborate set up to lull you into a false sense of security. It makes the second act hit all the harder, from the French soldiers literally bleating like sheep as they walk into the machine gun fire to the allied industrialites talking about ‘peace scares’ and the ‘economic necessity of war’.

The set is dominated by a copy of Theatre Royal’s own proscenium arch, which is moved about the stage and serves as church, trench and everything in between, and a ticker tape that mercilessly reels off numbers of casualties versus numbers of yards gained. The stark design draws your full attention to the actors and the pictures of the soldiers they represent that are projected in the background. It’s a harsh reminder that, even though we’re sitting in a theatre, the events were very much real.

The twelve cast members flawlessly melt from one character into the next, and handle both understated drama and slapstick comedy with the absolute conviction that is needed to make them work in such close proximity to each other. Another effective juxtaposition that director Terry Johnson has made is the one between sound and silence. The moments when the actors simply turn their backs towards the audience to look at the ticker tape in complete stillness are absolutely chilling.

It really is remarkable how a show like this can still be so effective fifty years later, when our attitudes towards the First World War have changed so much. At the time of writing, the facts that are being presented weren’t as widely known as they are today. We have War Horse. We have Jeremy Paxman. We know there were mistakes made that cost tens of thousands of lives. So, you might wonder, what’s the use in telling us again? Clearly we need to hear it, because, as we are reminded at the end, this was not the war to end all wars. War happened again, and again, and is still happening today. And that, sadly, is precisely what makes Oh What A Lovely War so relevant: it shows that, apart from advances in weaponry, we really haven’t come that far since then.

Previous: Why Fronts: A Contemporary Lap Dance (Part of Resolution! 2014), The Place – Review
Next: Put Your Sweet Hand In Mine, Battersea Arts Centre – Review