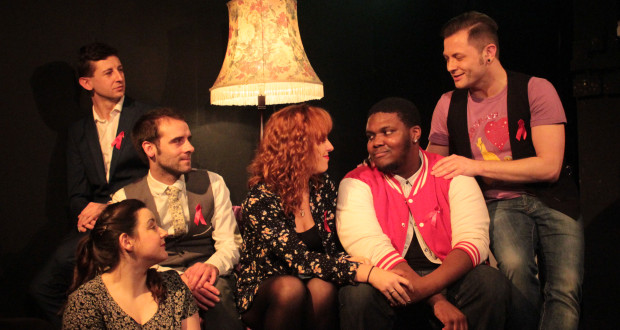 Cons: The material is perhaps a bit thin for a full-length musical and is starting to show its age.
Elegies for Angels, Punks and Raging Queens, White Bear Theatre – Review

Pros: Gorgeous and uplifting songs, expertly sung by a talented ensemble cast; moving portraits of AIDs victims. Cons: The material is perhaps a bit thin for a full-length musical and is starting to show its age. I have to admit, when I received my assignment to review Elegies, I wasn’t thrilled at the prospect of watching a musical, consisting of free verse poetry, about AIDS victims. It sounded portentous and depressing. Imagine my surprise then upon entering the White Bear Theatre to find the cast dancing around cheerfully. Elegies is all about celebrating the lives of people who have&hellip;

Elegies isn’t a perfect musical, but it is brilliantly executed in this production. Both joyful and touching!

I have to admit, when I received my assignment to review Elegies, I wasn’t thrilled at the prospect of watching a musical, consisting of free verse poetry, about AIDS victims. It sounded portentous and depressing. Imagine my surprise then upon entering the White Bear Theatre to find the cast dancing around cheerfully. Elegies is all about celebrating the lives of people who have AIDS, rather than focussing on their deaths.

First produced in 1989 in NYC, Elegies is a song cycle consisting of over 30 poetic monologues from the point of view of AIDs victims. They are already dead when they speak to us, constantly reminding us that this is how the disease ultimately ends. We see each character deal with stigma and the loss that come with the disease. Despite the sombre subject matter there are plenty of laughs and the play’s overall tone is joyful. The characters represent all walks of life, not just the raging queens mentioned in the title, but also married couples, professionals, drug addicts, and children, to name a few. By weaving a diverse tapestry of people united by one commonality, AIDS, the play aims to reduce the stigma of the disease. Aptly, this production is in aid of Terrence Higgins Trust, an HIV and sexual health charity.

In this production the characters are skilfully brought to life by an energetic cast of twelve. Each actor played two or three different roles and succeeded in convincingly creating their characters in the short amount of time allotted. I dare say some of the original American characters have been anglicised to suit the cast. The performers also do an impressive job of delivering the (often rhyming) verse in a natural sounding way.

Interspersed among the monologues are luscious songs by Janet Hood, the ballad My Brother Lived in San Francisco being my personal favourite. The cast are all fantastic singers, the choreography is smashing, and the piano and cello accompaniment worked perfectly. The White Bear is a small space, particularly for a big cast of twelve, but the size lends itself to a much more satisfying musical theatre experience than the West End can offer. The amazing sound of the cast completely surrounded me and gave me a taste of musical theatre heaven.

I cannot fault the cast or the execution of this production of Elegies. The show’s weaknesses, in my view, come from the original material. Due to the play’s structure, its message is drummed in, and I couldn’t help but think the material was stretched thin for a full-length musical. In fact, I actually thought the show had ended at half-time; thankfully a woman in the ladies told me that it was only the interval and saved me from missing the second half! Because we only see each character for a five-minute monologue, there isn’t time to establish any depth. The songs, though gorgeous, sometimes feel slotted in, rather than part of an organic whole with the monologues. And though the play retains relevance today, it is still very much a product of its late 80’s origin.

And yet, I really enjoyed it! This is an upbeat and moving show, brilliantly rendered by a fantastic ensemble cast.