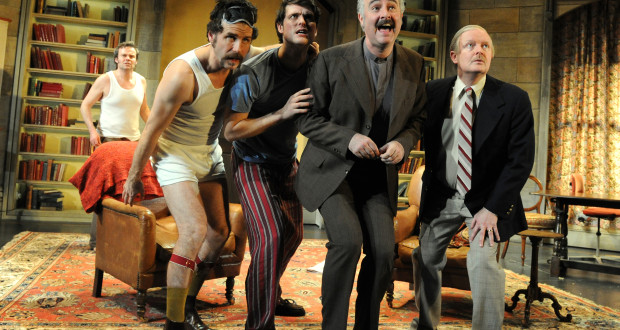 Pros: Some belly laugh moments at the drunken tomfoolery of the high & mighty.

Pros: Some belly laugh moments at the drunken tomfoolery of the high &amp; mighty. Cons: The show isn't particularly challenging or germane. Like most Londoners, I was relieved when they called off the tube strike, though for once I was reviewing in suburban Kingston and could actually drive to the theatre – of course I wasn't planning on the gale force winds and sheet rain but having seen the picture on the news, we Londoners got off lightly. Once we had braved the elements to get to The Rose, we were treated royally. There was a press reception at the&hellip;

A funny show that will please theatre’s core audience. However for me it was a little bland.

Like most Londoners, I was relieved when they called off the tube strike, though for once I was reviewing in suburban Kingston and could actually drive to the theatre – of course I wasn’t planning on the gale force winds and sheet rain but having seen the picture on the news, we Londoners got off lightly.

Once we had braved the elements to get to The Rose, we were treated royally. There was a press reception at the interval (with fizzy no less), author Michael Frayn in attendance and a general buzz. The Rose has a loyal audience who turn out from the surrounding suburbs in force. I have heard this particular demographic referred to as “affluent greys”, well-off and more senior members of society. The theatre depends on their ticket purchases and this production appeals directly to their sensibilities; this is not necessarily a bad thing, but it should give you a flavour of what to expect from the evening.

Donkeys’ Years is a farce telling the story of a 25 year reunion at a Cambridge college. Old scores come to the fore, a lot of alcohol is consumed and high jinks ensue. Not the most original of plot lines but the play premiered in 1976 so it’s hardly surprising that it feels a little dated. Yes, the point of it all may be, “Aren’t these rich people silly?” but the problem is that there is no one sensible on stage to point this out.

But enough about the play – as you can gather it isn’t entirely my cup of tea, so let’s move on to the actual production. Most of it was pretty good; the acting was fine (Ian Hughes as Kenneth Snell and James Dutton as the young Dr. Bill Taylor stood out), the directing was sufficient, and the design had good and bad points. And yes, that is my analytical side coming to the fore!

Any time a production pulls off the immaculate timing needed for a farce, I am impressed, but there were elements of the production that missed the mark. The humour started off as witty but descended into slightly cringe-worthy slapstick by the end of the first act. There was an impressive use of sound design when a recording of a speech from Jamie Glover’s odious MP character (who changes the most over the piece) was used to create “the Hall” scene in the auditorium whilst the scene was changed onstage.

The set was generally of high quality, even if the cast were still getting used to not crashing into it and causing a telltale wobble. However, I did find it odd that whilst the upstage door had a flat behind it showing the corridor outside, the stage right door did not, completely dispelling the notion of the offstage world. In a farce where doors fly open constantly, it seems a strange oversight.

There is nothing really wrong with Donkeys’ Years; it’s pretty funny, an entertaining way to spend an evening and there are some cheap tickets on offer (the website has lowest priced tickets going for £6). I left the theatre with the overwhelming sense that none of what I had seen really mattered, but sometimes theatre doesn’t have to.