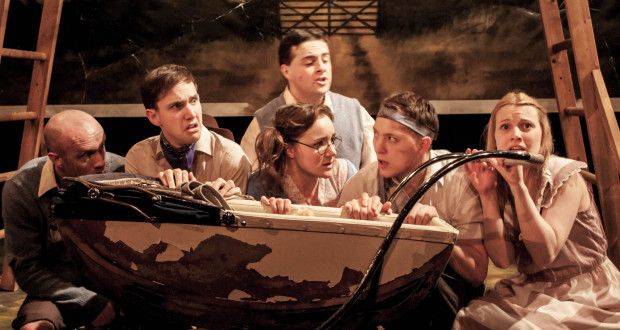 Pros: Some poignant moments; exceptionally strong performances from Paul Harnett and Christopher York; beautifully simple yet evocative set. Cons: Bit slow to start; could be described as Lord of the Flies Somerset Holiday Tour! To me, Blue Remembered Hills really is like Dennis Potter took Lord of the Flies, added a couple of girls and relocated it to Dorset. We may not be on a tropical island, but there's the same theme of casual childhood cruelty, the same animal torture, and the same bullying that escalates throughout to arrive at a disturbing end. The play follows the story of&hellip;

To me, Blue Remembered Hills really is like Dennis Potter took Lord of the Flies, added a couple of girls and relocated it to Dorset. We may not be on a tropical island, but there’s the same theme of casual childhood cruelty, the same animal torture, and the same bullying that escalates throughout to arrive at a disturbing end.

The play follows the story of seven children playing in the Forest of Dean during World War II. Left to their own devices, things take a darker turn. There is a bounty on squirrel killing which leads them to heights of violence none of them have previously experienced. Later, they egg each other on to an increasing frenzy of fear when sirens indicate that a Prisoner of War has escaped from a nearby camp. Oh, and there’s this one kid who really, really likes matches.

Despite my slight misgivings with the play itself, the actual performance is increasingly gripping as it progresses. There is strong acting from the whole cast. This becomes especially apparent at the end when they jointly recite the A.E Housman poem from which the play takes its name. Suddenly, they cease to be West Country children of the 1940s and return us to the present day, creating an immediately palpable distance from the distressing scenes that came before.

Blue Remembered Hills deals with a range of brutal subject matter; it could not be performed by child actors, oh no indeed. And yet, during the performance I never quite lose the awareness that these are in fact adults. Perhaps that’s something to be grateful for in this parade of casual cruelty as it gives a bit of breathing space from the unspeakable things going on. But it does undermine the point of shocking us with the cruel, even murderous, nature of these babes in the woods.

There are some really powerful moments. The fight scene between John (Mathew Foster) and Peter (Gary Roe) is a recognizable first foray into aggression; both are reluctant to be seen as weak but each visibly realises as they inch closer to a real conflict that the actual fight might be far less fun than the swagger leading to it. The swiftness of childhood enmity and alliances is also a highlight of the performance, with each actor quickly transitioning through roughhousing, teasing, bullying, and attention-seeking. Christopher York’s Donald, very clearly the bottom of the pecking order of this little gang, is chilling and sympathetic in equal measure: creepy, but clearly driven to his behavioural extremes by his horrific home life (“him burnt down his mam’s coal shed!”) The other children sometimes include him in their games but often viciously turn on him in the end. There are some lighter moments in a series of power plays between Audrey (Rose McPhilemy) and Angela (Nellie McQuinn), though neither of these shy away from threats of violence at appropriate moments either. One of the most compelling performances is Paul Harnett’s Raymond, who sustains a pronounced stutter and physically limiting clawlike hand (I won’t disgrace myself by trying to name his condition) throughout the play.

One thing I took away from this show was a question about the effect of war on children, as many of their games understandably centre on combat themes. And I thought about the number of children being brought up in contemporary conflict zones, whose childhoods have been interrupted and subsumed by war. What do they do when the adults aren’t looking?