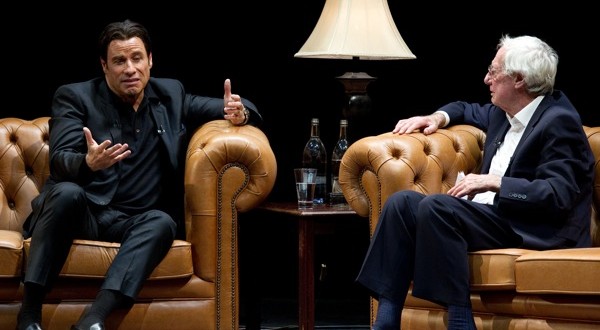 Cons: I was not quick enough to get on stage and dance with him.
A Conversation With John Travolta, Theatre Royal Drury Lane – Review

Pros: Seeing John Travolta's smile in the flesh. Cons: I was not quick enough to get on stage and dance with him. For the past few weeks, Theatre Royal has been hosting a series of talks with big names of the cinematic industry including Sylvester Stallone and Joan Collins. Their most recent installment featured John Travolta, the legend who has done it all: from musicals to rom-coms, from action to horror. It was a unique chance to see this colossus of the reel, presented in the interview as the man who has starred in some of the most influential&hellip;

It is overwhelming when your cinematic heroes are as wonderful and great as you expect them to be. An evening to always remember.

For the past few weeks, Theatre Royal has been hosting a series of talks with big names of the cinematic industry including Sylvester Stallone and Joan Collins. Their most recent installment featured John Travolta, the legend who has done it all: from musicals to rom-coms, from action to horror.

It was a unique chance to see this colossus of the reel, presented in the interview as the man who has starred in some of the most influential films of the past forty years. The opportunity brought together different generations of people that had either grown up infatuated with his movies, like myself, or had followed him closely from the moment he displayed his decadent moves in Saturday Night Fever, like my plus one and number one Travolta fan, my mum.

The evening started with the audience gathered in Theatre Royal being treated to a short film featuring a collection of his most iconic roles: Danny in Grease, Tony Manero in Saturday Night Fever, Vincent Vega in Pulp Fiction, Urban Cowboy, Get Shorty, Hairspray, Wild Hogs. The thunderous cheers and screams of the (mainly) female audience – and my eager plus one – built to a crescendo when the screen flashed showing the backstage of the theatre, and the frame of the man himself, who made his entrance to the song Staying Alive. He did not hesitate to treat us to some groovy moves as he approached the sofas placed in the middle of the stage.

I think his first impression can be summarized in the words I kept hearing as he talked to host Barry Norman: handsome, nervous and, my personal favourite, cheeky. He did not hesitate to bring us into the conversation by saying things like ‘I love everyone here’ and other comments about how he was going to make love to everyone in the audience. He definitely built up some high expectations for all present.

I thought the conversation would be a scripted dialogue commenting on his rise to stardom, but he was open, candid and full of surprising anecdotes. He talked about how Quentin Tarantino put his career on the line so he could play Vincent Vega. Travolta explained that he chooses his characters knowing he will be able to bring to them something no one else can, and that the only time he has ever asked for a role, was to be a villain in the James Bond-franchise.

The evening grew more emotional as Norman touched on Travolta’s personal life. I could never in a million years have thought that he would actually open up to complete strangers, in a setting as far away from intimate as possible, about the loss of his son, Jett, his respect and love for Scientology, his wish to be a father, and the loss of his girlfriend and mother in the span of two years. The faith he placed in complete strangers is remarkable, talking about these issues openly and without any media shielding him from the reality of his scars.

The conversation moved on to more cheerful topics: his love of flying under the name Qantas, his five planes (to take everyone there home with him) and a Q&A session with the audience that had him teaching a few lucky ones moves from Grease and Pulp Fiction.

Travolta said he doesn’t act for the money or fame. He acts for the joy of performing, to keep both him and us entertained. This had everyone, including myself, and mum, shouting ‘thank you’ at the top of our lungs. It was an evening to always remember.