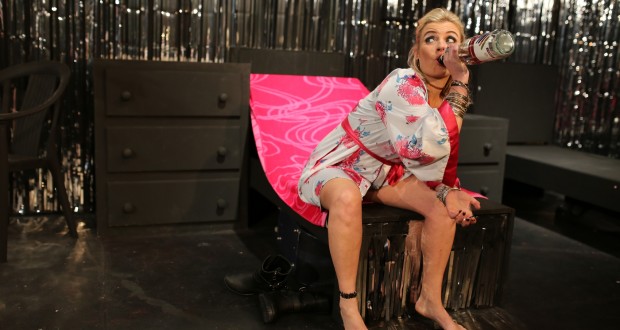 Pros: A funny, unpretentious, energetic and hard-hitting play with substance and laughs.

Pros: A funny, unpretentious, energetic and hard-hitting play with substance and laughs. Cons: At times uncomfortable to watch and listen to, with challenging content. The King’s Head Theatre is attached to the King’s Head Pub in Islington and has approximately 100 seats. It has been running since the 1970’s and the walls of the pub are decorated with many famous people who began their career here. The theatre receives no public funding and has an ambitious number of eight shows a year including an impressive opera programme. Shang-a-Lang is a play written by Catherine Johnson, writer of Mamma Mia!&hellip;

A funny show with great acting and comic timing. Deals with coming to terms with ageing without sentimentality.

The King’s Head Theatre is attached to the King’s Head Pub in Islington and has approximately 100 seats. It has been running since the 1970’s and the walls of the pub are decorated with many famous people who began their career here. The theatre receives no public funding and has an ambitious number of eight shows a year including an impressive opera programme.

Shang-a-Lang is a play written by Catherine Johnson, writer of Mamma Mia! The Musical and also the screenplay of the film. She has said of Shang-a-Lang that some people see it as ‘Mamma Mia’s evil twin’, but that she feels closer to it than her huge hit. She describes it as the story of ‘real messy lives’. Just to make sure the audience are in no doubt as to what they are going to see, Signal Theatre Company, the producers, state clearly on their website: ‘This is not a musical. Does not contain Abba. Not suitable for children.’

As we go into the theatre we are shown to our seats by Kevin (Tom Woodward), a Butlin’s redcoat who is all charm, banter and innuendo. We, the audience, are now campers at a Butlin’s holiday camp waiting in the Mirage Bar at the start of a 70’s music revival weekend. The set is a great combination of tacky 70’s glitz in the bar, contrasting with the bleak and depressing camp bedrooms. The play is a shock to the senses from the beginning, as three women burst onto the stage, dressed in bottom-hugging cat suits, hot pants and platform shoes, and singing Blockbuster in West Country accents. The swearing is relentless and heavy duty. The women are school friends, about to turn 40, trying to find love, sex and freedom, aided by large amounts of vodka and Scrumpy. The play is not so much about their relationship with each other as the lives they have left behind. In the case of Jackie (Kellie Batchelor), it is a life with a controlling husband that in some ways she longs to escape.

They have grown apart but have come back together this weekend for the birthday of their friend Pauline (Lisa Kay), who grieves for the fact she is childless and doesn’t have a husband. Tagging along is Lauren (Samantha Edmonds), a self-confessed drunk who has left her husband and children to pursue a life of casual sex and drinking. They come together to bond over their love of the Bay City Rollers and their shared teenage experiences. Of course, the weekend doesn’t go to plan, and when they meet Vince (Thomas Craig), an ageing northern member of a 70’s tribute band struggling to get over the break-up of his marriage, and his young side kick Carl (Ben McGregor), who is out to have sex with as many different women as he can, life does get messy.

There is no nod to political correctness in this play and at times that does make for very uneasy laughter. When two men come on stage ‘blacked up’ with afro wigs on as part of being in a soul tribute band, I saw people visibly wince. The characters, love or hate them, are honest and unpretentious and by the end of the play you do have empathy with them as you see them facing their difficulties and getting by in their own ways.

Signal Theatre Company chose this show because they want to make people laugh. If the audience on this night were anything to go by, and in particular the large group of twenty-something young men sat behind me, they succeeded.

Previous: We, Macbeth, Theatro Technis – Review
Next: Doing the Business and Blind – A Double Bill, The Courtyard – Review