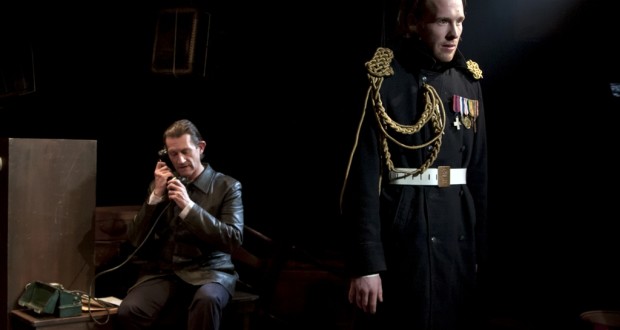 Pros: The play took us all along on a journey with the Russian refugees of the 1920s.

Pros: The play took us all along on a journey with the Russian refugees of the 1920s. Cons: Questions were left unanswered over the whole performance. Flight is a 1920s play by author Mikhail Bulgakov, running at the Brockley Jack Studio Theatre. The play follows the lives of five characters through the last days of the Russian Civil War, and their subsequent flight and survival in Constantinople and France surrounded by many other Russian refugees. The Brockley Jack is a theatre pub venue in South East London, a five to ten minute walk from Crofton Park or Brockley station,&hellip;

A melancholic and vivid representation of complex characters and situations. Visually and emotionally stunning, the performances were fantastic (Michael Edwards as Army official Khludov was my favourite).

Flight is a 1920s play by author Mikhail Bulgakov, running at the Brockley Jack Studio Theatre. The play follows the lives of five characters through the last days of the Russian Civil War, and their subsequent flight and survival in Constantinople and France surrounded by many other Russian refugees.

The Brockley Jack is a theatre pub venue in South East London, a five to ten minute walk from Crofton Park or Brockley station, with some very good wines available to accompany the performance. The theatre space is usually a lot bigger but on this occasion a black curtain divided the space to create an intimate actor/audience relationship. The stage was decorated with groups of old travel, several of them hanging from ropes on the ceiling. The whole set projects an immediate feeling of movement and transition, a feeling that is later reaffirmed when the characters start telling their stories. Several pieces of furniture and props were used to bring the different locations to life: a church, a market in Constantinople, a flat in Paris…

The play opens with cast member Nadia Shash describing what we are about to see; Kurchulan, a town in Southern Ukraine, October 1920. The White Russian Army, loyal to the deposed Russian tsar, is about to fall to the Bolshevik Reds. Shash acted as a narrator throughout the play, introducing every new location and how much time has passed from one scene to the other. I found it extremely helpful considering I had very little idea of the actual events that went on during the end of the Russian war, and with the play quickly transitioning from settings in Ukraine to locations in Turkey and Europe, it ensures you are always in control and can focus on the different plotlines of the characters, of which there are many!

The main storylines revolve around couple Serafima Korzukhina and Sergei Golubkov, played by Josephine Rogers and Callum Cameron. Serafima is the wife of a White Army official travelling to be reunited with her husband. On the way, she meets and falls in love with young philosophy scholar Golubkov. Together they find refuge in a church where they encounter General Charnota (Mark Moore) hiding from the Reds with his lover Luska (Laura Mulholland). Then, we have the high command of the White Army, represented by Khludov (Michael Edwards), who are preparing to surrender. A few scenes later these stories have intertwined and the five characters are living as refugees in Constantinople together.

This summary of the plot is incredibly simplified; there are large numbers of characters and stories hidden within stories. This means you’ll see a very accurate and human account of 1920s Russia, with its people and history, but you can’t space out for a second! By the end everything has fallen nicely into place; the background history and situations are familiar and easy to follow, and the play has managed to portray amazing insight into the lives of complex and beautiful characters.

There are twelve actors working on Flight, and every single one never lets go for a moment during the play. Even though some only make brief appearances due to the large amount of characters, they manage to portray fully-fledged personalities every second of every scene. The main cast merged with their roles effortlessly, but my personal favourite has to be Edwards as Khludov; it’s like seeing Guy Pearce transition from vicious executioner to madman, haunted by the memories of those he killed. When Khludov repeats that no one loves him, your heart can’t help but go out to him – he is in definite need of a hug from the audience!