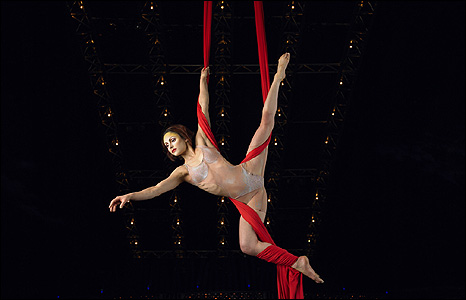 Pros: An extremely impressive and gasp-inducing production complete with stunning music. Cons: The storyline seemed somewhat superfluous and at times quite distracting from the acts. Having never been to see Cirque du Soleil, but having heard many good things, I was excited for my first experience. After reading up about them, I found out that every show they do is very different. There are seventeen productions performed all over the world (this particular one having debuted in 1996) and it is quite clear to see why they have been so successful. The audience meet a young girl, Zoe, she&hellip;

If you are a seasoned Cirque goer then this may not be as impressive as other shows but for most this will be an evening which will leave you awe inspired.

Having never been to see Cirque du Soleil, but having heard many good things, I was excited for my first experience. After reading up about them, I found out that every show they do is very different. There are seventeen productions performed all over the world (this particular one having debuted in 1996) and it is quite clear to see why they have been so successful.

The audience meet a young girl, Zoe, she is bored; her parents, distant and apathetic, ignore her. Her life has lost all meaning. Seeking to fill the void of her existence Zoe, the Quidam – an anonymous passerby in Latin – is transported into what appears to be a Midsummer Night’s Dream-esque forest-fairytale-wonderland. As she walks around, she encounters a number of bizarre characters as well as people performing incredible stunts who encourage her to free her soul.

To get us started, we are shown some very impressive work with not one but three diabolos – sounds simple, but give it a go. Then there is some group skipping. When I was young it took me quite some time to learn to jump into one rope… let alone jump between five ropes while avoiding all of the other skippers meandering through them too.

The first half is good but the second half was astonishing. Particular favorites were the unbelievably muscular couple, Yves Decoste and Valentyna Sidenko whose specialties are slow-motion, entwined lifts and contortions. Looking at the photos from the program afterwards, I couldn’t work out how they achieved what they did and often couldn’t work out whose body belonged to whom. Their act appeared to completely defy all laws of anatomy and gravity. The trust which is held between these performers must be incredible.

The music is stunning and despite songs having either no words at all or being sung in other languages, I walked away humming it and desperate to get the CD. Having live music really does make a difference to the feel of the production and I would quite happily go to see this band perform with or without the acrobatics.

Perhaps if you are a seasoned Cirque-goer, this might not seem as impressive as some other performances they have done in the past – there is no wheel of death, nor any trapeze work, and the storyline throughout is a tad baffling and often nonsensical. I quite look forward to getting the chance to see them performing a standard cabaret show with no story. The reason is that, frustratingly at times, the plot distracts from the action as people in the background appear to just be there for the sake of it. At one point I found myself watching a woman spinning in circles as if playing the children’s game, Dizzy Dinosaurs. It was fairly surprising that she managed this without either falling over nor throwing up for an entire act, but when there are people 30 feet in the air performing dangerous and often synchronized acrobatics above you, it was rather distracting and a bit of a waste to sit and watch her instead.

None the less, after leaving the theatre, I ran out of superlatives to describe this show. It cannot be denied that what they do is brilliant. I defy you to not gasp and be astounded as yet another person is thrown on to the top of a leaning tower of people, or as the impressive finale act, the Banquine troupe, show their acrobatic talents. Seeing Julie Cameron in her solo act, Aerial Contortion, gracefully tumble down at least 30 feet to the floor held only by red silk was also astounding. I was quite simply astonished by the things I saw, predicting what was coming next and yet not really believing they were actually about to do it. I cannot see how you could be disappointed if you go to see this performance