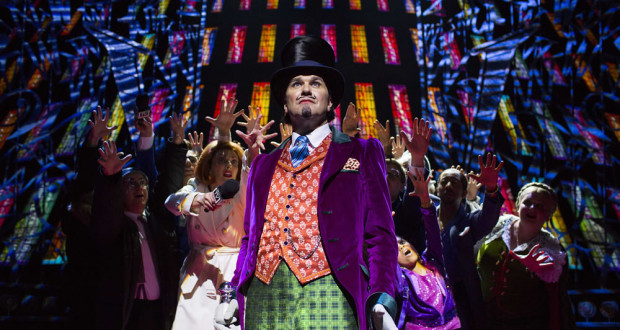 Pros: Incredible set designs and choreography catapult the show right off stage and into the imaginations of the audience.

Cons: At times, the spectacular designs get slightly in the way of the story itself.
Charlie and the Chocolate Factory, Theatre Royal Drury Lane – Review

Pros: Incredible set designs and choreography catapult the show right off stage and into the imaginations of the audience. Cons: At times, the spectacular designs get slightly in the way of the story itself. It's the chocolatey tale that first captured the appetites of children and adults alike in 1964. Fifty years later and Roald Dahl's classic novel Charlie and the Chocolate Factory has inspired two hit films, each with their own memorable soundtrack. Joyous music and singing Oompa Loompas play such a crucial role in defining the magical dream world of Willy Wonka that it was only ever&hellip;

A fantastic show with a vastly talented cast and toe-tapping tunes that will stick in your head for days.

It’s the chocolatey tale that first captured the appetites of children and adults alike in 1964. Fifty years later and Roald Dahl’s classic novel Charlie and the Chocolate Factory has inspired two hit films, each with their own memorable soundtrack. Joyous music and singing Oompa Loompas play such a crucial role in defining the magical dream world of Willy Wonka that it was only ever a matter of time until Charlie Bucket and his entourage jumped off our screens and into the West End.

For the most part, Shaiman and Wittman’s score steers clear of its predecessors, and those remaining vestiges of movie magic are welcome. I was delighted that the lyric, “great big greedy nincompoop”, first heard in Tim Burton’s film adaptation as Augustus Gloop whizzes up a pipe, made the cut, and the beautiful Pure Imagination resounds as a happy memory from many a childhood. The rest of the songs play with genre in a way that allows the production to play with its audience’s imagination. Stand out numbers include Don’t ya Pinch Me, Charlie, a jubilant military march danced by Charlie’s previously bedridden grandparents, and the introduction of the Double Bubble Duchess Violet Beauregard; think Fresh Prince of Bel Air meets Hannah Montana, but better and with more glitter.

The show is, of course, stolen by the five golden ticket winning children. The production takes the characters and amplifies them to the point that each child is a caricature more akin to the original Quentin Blake illustrations than anything we’ve seen on screen. Violet Roche was the perfect combination of squeaky and despicable as the tutu-clad Veruca Salt, and Jenson Steele (who featured heavily on Channel 4’s program about the making of the show) was larger than life in every sense of the word as the hilarious Augustus Gloop. Douglas Hodge plays a quirky Willy Wonka, brimming with animated sarcasm and wit. While his ceaseless mocking of the children and their parents prevents much development of Wonka himself, he carries the second half of the show with cheeky charisma and smooth, confident vocals.

Perhaps the tastiest aspect of Charlie and the Chocolate Factory, however, is the sensational set design. Dahl’s fantastical and sometimes outright ridiculous world explodes onto the stage as, scene after scene, magnificent and vast sets sail seamlessly into view. Each one is the perfect amount of far too much, with flashing lights and towering structures to match the vast character personalities. However, the visual highlight of the show is one of the simplest moments of all, when Charlie and Mr Wonka sail across a star dotted stage in the great glass elevator. Even the faint hiss of hydraulics fails to ruin the magic of the moment, as the two make their flight seamlessly across the stage.

And what of the Oompa Loompas? They are in fact all played by fully grown adults who, with the aid of some ingenious costume designs, halve in size right before you. My personal highlight was the entrance of the neon rave dancers, but those mounted on giant dancing squirrels gallop closely into second place.

Put more simply, Charlie and the Chocolate Factory is a show that has to be seen to be believed. It is a spectacle to rival the best; Wicked‘s flying monkeys have been grounded, and who needs a crashing chandelier when you have a great glass elevator? The ingenious design of the production is its most endearing feature. While the cast are strong individually, their interactions with one another were limited, amongst the five children especially. However with its delicious scoring and delightful young cast, Charlie and the Chocolate Factory is a show to tickle taste buds of all ages. Go on-take a bite!