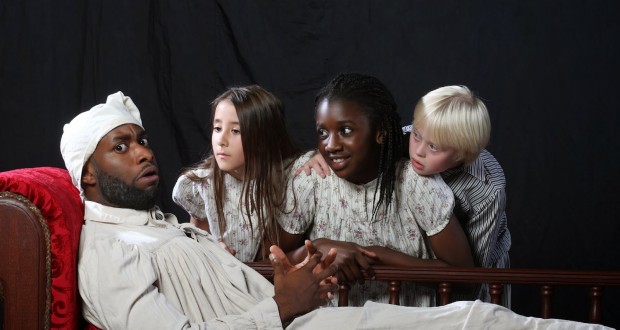 The Night Before Christmas, Chickenshed – Review

Cons: For a show about imagination, both the storyline and the music are quite unsurprising and, well, somewhat unimaginative.
The Night Before Christmas, Chickenshed – Review

Pros: Spirited acting and beautiful costume design put this production a step above your average community theatre production.  Cons: For a show about imagination, both the storyline and the music are quite unsurprising and, well, somewhat unimaginative. ‘What’s in a name?’. As a great lover of Shakespeare this is the quote that popped into my head upon hearing that I was going to review a show at a theatre called the Chickenshed. Fortunately I can say that in this case the answer to that question is: not a lot. Quite contrary to what the name might suggest, the Chickenshed&hellip;

Cheap and cheerful: an easy and fun night out for kids and grownups of all ages.

User Rating: 2.73 ( 2 votes)
‘What’s in a name?’. As a great lover of Shakespeare this is the quote that popped into my head upon hearing that I was going to review a show at a theatre called the Chickenshed. Fortunately I can say that in this case the answer to that question is: not a lot. Quite contrary to what the name might suggest, the Chickenshed is a good-sized, well-equipped theatre, run by friendly people. Don’t let its location at the end of the Piccadilly line scare you off: 45 minutes is all it takes to get back to central London. This is easily made up for by the fact that it’s more spacious than a lot of theatres closer to the city centre.

The Night Before Christmas is about a group of children who find a stack of presents on Christmas morning that are not meant for them. In an attempt to save Christmas they decide to deliver them to the intended recipients themselves. With the help of an Elf and two reindeer they travel through time and imagination to visit Cinderella’s ugly sisters, Ebenezer Scrooge and the Snow Queen. A proper Christmas fairy tale with a generous helping of pantomime, this is a show aimed at pleasing the whole family. The Night Before Christmas is a bit too predictable and undemanding for my own tastes, but undeniably funny.

The Chickenshed is a company that makes inclusive theatre, which means that the stage is shared between people of all ages and abilities. That being said, this clearly is not an amateur production. Apart from a few weaker moments articulation-wise, the acting and singing are solid. The tunes are catchy enough, although not very memorable (by the time I got back to the tube station I’d already forgotten the finale). More important than all that though, are the energy and joy radiating off the stage. I know of at least a few professional actors that could learn a thing or two here.

Another way of working ‘inclusively’ is through the use of creative signing. Beautifully integrated into the story, the singers are storytellers rather than translators.

The colourful and imaginative costume design is one of the highlights of the show. Look no further if you’ve got a Christmas-themed fancy dress party coming up: designer Graham Hollick has the perfect snowman dress that can be worn by both men and women, as evidenced by ugly sister Michael Offei. Lady Gaga enthusiasts will appreciate the Snow Queen’s look, which seems to be inspired by the pop singer.

The extravagant costuming is actually quite the necessity, due to the rather sparse scenery in the first act. A large part of the show is staged in front of a simple white backdrop, which is pulled away in the second act to reveal a beautiful set that doubles as a climbing wall. Why the creative team decided to cover it up for most of the show is a complete mystery to me, as I certainly wouldn’t have minded looking at it all evening.

Overall, The Night Before Christmas is a very good way of spending a night at the theatre and getting into the Christmas mood. Perhaps a case of form over content, but when it’s executed with this much conviction, who really cares?

Previous: Our Ajax, Southwark Playhouse – Review
Next: Twelfth Night Or What You Will, The Rose Theatre – Review