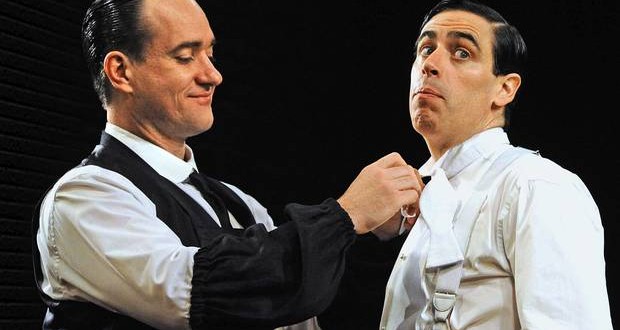 Pros: An incredibly clever set and an intricately entertaining plot.

Cons: Trying to be a bit too clever meant that the pace and humour of the story suffered.
Perfect Nonsense, Duke of York’s Theatre – Review

Pros: An incredibly clever set and an intricately entertaining plot. Cons: Trying to be a bit too clever meant that the pace and humour of the story suffered. I think I’m hilarious. Earlier today at work, my colleagues and I were coming up with bakery-themed hip hop artists. I threw into the mix Crusta Rhymes (so-so), Puff Daddy (obvious) and my standout smash hit winner, The Notorious P.I.E… Fair to say I was chuffed, but not everyone saw the funny side. Others would rather have watched a video of a dog running into a wall. Or a camel dressed&hellip;

An ambitious production that promised unfettered excitement but which ended up erring more on the side of plodding and predictable.

I think I’m hilarious. Earlier today at work, my colleagues and I were coming up with bakery-themed hip hop artists. I threw into the mix Crusta Rhymes (so-so), Puff Daddy (obvious) and my standout smash hit winner, The Notorious P.I.E… Fair to say I was chuffed, but not everyone saw the funny side. Others would rather have watched a video of a dog running into a wall. Or a camel dressed as Miley Cyrus. My boss would rather have seen us all do some work.

Anyway, what I’m trying to say is that humour is of course subjective. So when approaching a comedic play like Perfect Nonsense, there will always be some polarisation. And in this instance, the primary division is between those familiar with PG Wodehouse’s comic creations Jeeves and Wooster, and those who aren’t.

Jeeves and Wooster is a classic pairing of a level-headed valet (Jeeves) and his self-destructive aristocrat employer (Bertie Wooster). They first appeared as short stories in the early 1900s and then in the 90s as a TV comedy show starring Stephen Fry and Hugh Laurie. Yes, those guys.

In tonight’s incarnation, Bertie (Stephen Mangan) is blackmailed by his aunt to steal a silver ornament from a man he doesn’t like, whose niece is keen on marrying him, if, that is, she ever breaks up with his best friend, who has a habit of offending anyone he spends time with. It’s a complicated plot and, by now, your farce alarms should be ringing.

To add to this manic melting pot, the story was presented as a first-person narration from Bertie, acted out by himself, Jeeves (Matthew Macfadyen) and another butler, Steppings (Mark Hadfield). This meant that, with Bertie always in the action, it left the remaining two to play all the other characters. “This is going to be f**king nuts,” I said to my friend, gleefully. And then I remembered: I was there on my own. The man sitting next to me was not my friend. Sheepishly, I went back to focussing intensely on my ice cream.

At first, the play-within-a-play device proved to be a rich source of gags that loosely fell into three categories: when story-Bertie switches to real-Bertie and comments on being in a play; when Jeeves unveils an ever more ingenious piece of set that he’s designed; and when they have to think up clever ways to overcome the problem of an actor having to be in two places at the same time. To keep all this going and fit a well-worked story around it so snugly is a remarkable achievement from the writers, and one which certainly pleased the audience.

Personally, I felt it was all too reliant on the staging method to provide the jokes. So much so, in fact, that it was to the detriment of the story. When you’re presented with a farcical setup, you expect it all to be resolved in a flurry of raucous energy and excitement. Here, because there were so many constraints, the storyline just couldn’t run at the required electrifying pace. In fact, some of the really farcical moments couldn’t feasibly be shown on stage, and had to be referred to. In short, it was snagged on the very thing that made it clever and unique.

So I suppose this was the secondary division: between people who enjoyed seeing the same joke played in slightly different ways throughout, and those who wanted a shift in comedic style to allow the story to take hold. A lot of people seemed to be in the former camp, but not everyone. After a fairly predictable skit with some bedsheets and a window, the man next to me tutted loudly. Maybe we could be friends after all.

For me, the show was summed up by one particular incident: Jeeves was lowering a piece of set, which then jammed. For real. Stephen Mangan started riffing, and the whole audience – me included – were in hysterics. It was funny because it was so genuine, so unexpected: an actual unrehearsed cock-up. Up until then, I felt the nonsense had been a little too perfect for its own good.