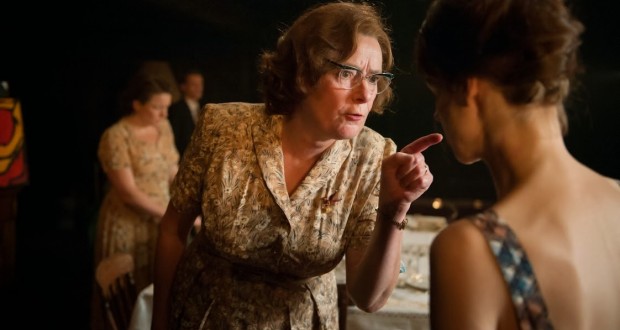 Pros: A British classic that entertains and is in some ways timeless.

Cons: The play proceeds at a leisurely pace, which may not be to everyone’s taste. However, I found that this increased my understanding and empathy for the characters.
Roots, Donmar Warehouse – Review

Pros: A British classic that entertains and is in some ways timeless. Cons: The play proceeds at a leisurely pace, which may not be to everyone’s taste. However, I found that this increased my understanding and empathy for the characters. Some plays you admire for the skill of the acting, some for the technical expertise, and some for the skill of the playwright and how the story resonates with you afterwards. All of the above rang true during my viewing of Roots at Donmar Warehouse. The first thing the audience sees when they sit down is the set of&hellip;

A sublime production that has historical resonance and, more importantly, says something about our relationship with our families.

The first thing the audience sees when they sit down is the set of a rural kitchen, in particular the table. This immediately reminded me of the National Theatre’s Table, another five star play. The aroma of food cooking immediately attracts the audience and creates the ambience of ‘home’. Throughout the play, Ian Dickinson’s sound design denotes the time of day – the birdsong chorus at dawn and dusk, and the arrival/departure of nearby buses in the daytime. Later in the play, the ticking of a clock is used to great effect to accentuate the awkward silence between family members.

Set in 1958, the year it premiered, Roots focuses on Beatie Bryant who, after spending several years in London, goes back to visit her family in rural Norfolk. She first visits her sister Jenny and brother-in-law Jimmy, and the following day visits her parents. Foremost in her thoughts and conversation is her boyfriend Ronnie. Ronnie never appears in the play but his presence permeates every scene. A young socialist by conviction, Ronnie’s passion and knowledge bewitches Beatie and opens her eyes to not only the arts, but also to the way things are and the meaning of things. Ronnie is meant to visit Beatie’s family, but before his arrival, Beatie makes her thoughts known about the way her family has always lived their lives and, in contrast, the way her life has been since knowing Ronnie.

Much has been made over the years about Ronnie’s political affiliation, and whether his thoughts reflect Wesker’s view of socialism and the working class in post-war Britain. Personally, I responded on an emotional level to Beatie’s homecoming – after a spell of living away and having her horizons broadened, she realised that nothing had changed at ‘home’ but that she was no longer the person her family once knew. It’s a rite of passage to evaluate one’s family and one’s place in the world once you have left your hometown. As someone who moved to London many years ago, I recognised and appreciated the observations Beattie made about re-visiting her roots.

Jessica Raine, who plays Beattie, owns the role and gives one hundred per cent of her energy. She portrays a young woman who was once blissfully unaware of what education has to offer, but who has had, to quote Aldous Huxley, ‘the doors of perception’ opened. In many ways, this is the reversal of the role she is most famous for, Jenny Lee on BBC’s Call The Midwife. The chemistry between Beatie and her mother Mrs Bryant (Linda Basset), her sister Jenny (Lisa Ellis) and other members of cast was palpable, and you really felt they had known each other for decades.

Almost without exception, the cast played their parts to perfection. Even hen there was no dialogue between the characters, everyone was saying a million different things with their facial expressions and body language. Without giving anything away, Beatie has her own epiphany about the value of things, but, like a lot of things, the answers we’re looking for lie not just in other people but also within ourselves.

As a side note, I was making notes about the play during the interval, which didn’t go unnoticed. A woman who was sitting nearby asked whether I was the director. I told her I was actually reviewing the play and she replied that Roots was a very good play. I wholeheartedly agreed.