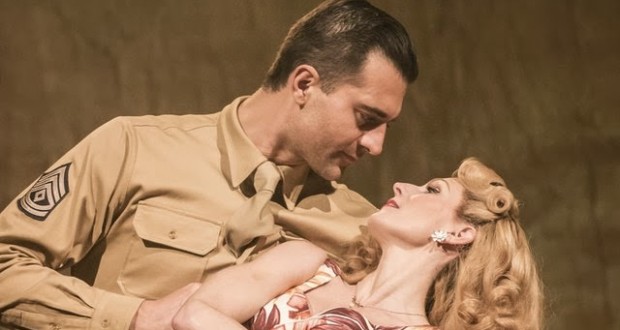 Credit: From Here to Eternity

Cons: Despite the fun and the fast-pace, not much action happens until well into the second half.
From Here to Eternity , Shaftesbury Theatre – Review

Pros: Great swinging songs, superb scene and costume design and lots of steamy raunchiness equal lots of fun! Cons: Despite the fun and the fast-pace, not much action happens until well into the second half. It wasn’t until I saw the advertisement for this new West End production looking at me from every angle on tube stations that the reality of holding two media night tickets in my pocket sunk in. Yes, I was about to enter one of the most prestigious London venues and give my humble views about a prominent production, and I was going to be&hellip;

Harvey’s direction may lack a bit of punch but it delivers a tremendous amount of fun and frolics. Brilliant, good-feel, swinging musical.

User Rating: 4.75 ( 1 votes)
It wasn’t until I saw the advertisement for this new West End production looking at me from every angle on tube stations that the reality of holding two media night tickets in my pocket sunk in. Yes, I was about to enter one of the most prestigious London venues and give my humble views about a prominent production, and I was going to be sitting next to all the national newspapers’ big guns. West End, here we come! Not that I wasn’t looking forward to this already: I am a big fan of the recent 1930s craze and the swinging musical scene, and having fond memories of the 1953 Lancaster/Clift Hollywood hit on which this musical is based, I was in the mood to put my vintage soldier hat on.

As the show starts, we are immediately transported on the Pacific Ocean, sailing away from Oahu on a mainland-bound vessel where good-time girl Lorene (the excellent Siubhan Harrison) and captain’s wife Karen Holmes (Rebecca Thornhill) meet and talk about the men they just lost in the Pearl Harbour attack. The scene design and choreography, skilfully directed by Javier De Frutos, make this sad moment almost mystical. Thankfully, the show soon takes a merrier turn as we are transported back to a time when none of the soldiers at Schofield Barracks were concerned with Japs landing bombs on their heads, and instead busied themselves in full orchestra dancing songs, chasing women, betting on the ring and generally being soldiers.

Just to be clear, this show is more about music and romance than it is about WWII. G-company Blues is a very catchy vintage blues song, impeccably executed by the male actors, all looking pretty sassy in their beige uniforms and sculptured bodies, dancing and lapping around their beds. Equally catchy is Thirty Year Man, when Private Prewitt’s character (Robert Lonsdale) is introduced, complete with his bugle. Lonsdale gives perhaps the strongest performance of the excellent cast, and I noticed my other half soon taking way too much interest in his toned muscles.

The story unfolds with gentle pleasantness, each song introducing another lead character: Sergeant Warden (Darius Campbell of Pop Idol fame) displays an exceptional tenor and Karen is very sensual in Another Language. However, it’s Private Angelo Maggio (Ryan Sampson) that soon becomes everyone’s favourite with his addictive performance and Italian-American accent and attitude. Meanwhile, Warden falls into the arms of his Captain’s wife Karen and the two engage in a dangerous affair of hot and sweaty sex scenes on the Hawaiian beaches. A lot more raunchy action goes on at the local nightclub where male audience members finally get their fair share of flesh on display. And Prewitt and Lorene eventually fall passionately in love too. To add to the heady mix, Maggio turns out to be a ‘queer roller’ and seduces Prewitt into making money at the gay club. Unfortunately, the military police were not as impressed as I was by the beautiful drag queen’s costumes.

Despite all the shenanigans and display of flesh, lust, music and joyful sorrows, the plot lacks a certain drama. All flows nicely but somehow underwhelmingly and I kept wondering if the baddies would eventually turn up. And yes, they do, about twenty minutes before the end the whole stage starts shaking and the barracks are raged by fire and explosions: the Japs are here! Help!

On the whole, I can see why some critics may not like the relatively slow plot and the seemingly forced steaminess of this musical. However, I loved it, and I’m sure the audience will flock at this new production. Why? Great vintage set and costumes, solid acting, some star-quality music led by a magnificent live orchestra, lots of romance and laughter and enough raunchiness to satisfy everyone. If this sounds good to you, book your ticket now.