Music by Luca Tieppo
Directed by Iskandar R. Sharazuddin
★★★★
Pros: Mr Wyrd’s performance and dialogues. Truly enjoyable.
Cons: The lyrics of the songs add a level of abstraction to the story that may perhaps complicate it.
Our Verdict: A powerful production filled with emotion, music and magic.
Suggestions of Love, an Opera in one act, tells the story of two people – merely known as he and she – and the otherworldly forces that bring them together. Fusing music with theatrical performance, the show brings you into a world of alchemy, magic and the most basic and powerful of emotions: love. There’s one question hanging over us: how much of a role does destiny play into bringing two people together?
The character Mr Wyrd – the main protagonist played by director Iskandar R. Sharazuddin – introduces the first of the two realities the play is built around. The first is the magical setting where Mr Wyrd controls and plays with human destinies and encounters. The second is the human world, in which he (played by Nir Kitaro) and she (Claudia Jones) exist. These two realities look into each other and are intimately intertwined. By means of witching boxes and occult mechanisms, Mr Wyrd bends chance to produce the beginning of a love story between he and she.
There’s something very magical about the way the two scenarios are presented. The human world, which is the one we should be able to better relate to, is in fact the more abstract reality. It is only through musical numbers that he and she express their emotions, their fears of being alone and the necessity to connect with another human being. There are no names and no dialogue, only music and feeling. This is a stark contrast with Mr Wyrd’s world, in which ‘scientific’ conversations happen. The audience connects more easily to this magical world, and it is in the human world where our instincts take over. In music lies the most basic of human emotions and it is (very intelligently) the chosen way for he and she to transmit their feelings. In essence, the human world is now ethereal, backed up with blue lighting, white costumes and slow elegant dancing. Mr Wyrd’s world on the other hand is bathed in clear colors, much like the direct manner in which he engages the audience. Transitions between the two on stage are created by means of these changes in lighting and color.
I really loved the concept of the play; fate is no longer an abstract identity but a person (Mr Wyrd) conversing with the audience, explaining his thought processes whilst directing he and she. Mr Wyrd talks to you about our perishing existence, passions and expectations. It’s a straightforward dialogue, fitting of a scientific character used to dealing with complicated mechanisms such as human nature.
Before the play started, Sharazuddin warned us that that he was in fact an understudy, and that we should bear with him should we see a nervous performance. I don’t believe the main actor could have delivered the part so well, so bravo to him – a cracking performance which no doubt benefited from his strong directorial interpretation of the character.
My only issue was with the lyrics of the songs. The story behind he and she is already an abstract one of feelings, empirical ideas, sound, intuition… and that in itself is a powerful message. The music was haunting and romantic, but the lyrics added an additional level of abstraction that may perhaps have twisted things a little.
Suggestions of Love is wonderfully built on concepts of chance and fate. He and She are puppets to Mr Wyrd’s hand whilst still allowing for human will to take over. Overall a wonderful experience.
Please feel free to leave your thoughts and opinions in the comments section below!
Suggestions of Love has now finished its run at the King’s Head Theatre. For more information visit http://t.artproductions.co.uk/.
Claudia Jones Iskander R. Sharazuddin King's Head Theatre Luca Tieppo Nir Kitaro Riccardo Bentsik Suggestions of Love T.Art Productions 2013-09-18
+Everything Theatre 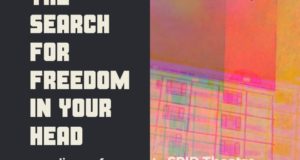