Directed by Scott Ellis
★★★
Pros: A mesmerising performance from Simon Grujich in the title role, a fast-paced evening, and a refreshingly clear and back-to-basics approach to the most well-known play in the English language.
Cons: I felt that the final scene was not as moving as it should have been and that the supporting cast were outshone by Grujich’s performance.
Our Verdict: This is a solid production that uses simple and effective staging to foreground Shakespeare’s text, but somehow it is shy of greatness.
Hamlet is arguably the most popular play in the English language. The story of the Prince of Denmark, who seeks revenge on his Uncle Claudius for murdering the King and marrying his mother, has been performed countless times and interpreted in every imaginable way. Hamlet has also given the English language so many beloved expressions that to watch a performance is to have well-known phrases rain down upon you throughout the evening. I suspect that its familiarity and weighty reputation make Hamlet a particularly daunting task for any theatre company.
This production from the Merely Players is in many ways a back-to-basics approach and all the more refreshing for it. The stage of the small London Theatre is bare, allowing Shakespeare’s language and characters to take centre stage; their rightful place, in my view. There are just six cast members so most are performing multiple roles. The actors wear contemporary dress but the production is not pushy about imposing a modern interpretation onto the story.
All the performers have mastery over the Shakespearian language and the meaning of their lines is always clear. They also deserve credit for breathing new life into those well-known expressions. The production is fast-paced and the evening goes by remarkably quickly. In fact, the play’s first half is surprisingly funny, largely due to Albert Clack’s turn as Polonious, played as doddering and long-winded.
But ultimately, it’s all about the Prince of Denmark. To play the role of Hamlet is the dream of many actors and Simon Grujich is up to the massive challenge. He is magnetic in the title role, intelligent, violent, sweaty, and in turns both terrified and terrifying. I did feel that the supporting characters, though secure in their performances, lacked Grujich’s vitality and charisma. But perhaps this is always the way with Hamlet.
This production is also blissfully free of gimmicks and I thought the few devices that were used worked well. Hamlet’s madness was explored using a mirror on stage – simple but effective. I also loved the depiction of the Player King, the actor who performs the play designed to ‘catch the conscience of the King.’ Here, the role was played by a remarkably expressive puppet. I thought both devices nicely foregrounded Hamlet’s preoccupation with appearance versus reality. Though I admit I was less convinced by the swordfight at the end of the play, here reinterpreted as a boxing match with brass knuckles. This final bloodbath, surely a challenge for any production, felt messy and somehow did not deliver the tragic impact it should have.
I also admired the production’s emphasis on the youth of Hamlet. The role is often played by actors who are considerably older than the character. But Simon Grujich, with his t-shirt and curly mop, reminded us that Hamlet is also a melancholy and brainy student. Similarly, Katie Ellen-Jones and Chris Matragos are also strikingly youthful in the roles of Ophelia and Laertes and their performances emphasized childish aspects of their sibling relationship.
So plenty to admire but I couldn’t help feeling that something was missing. I left feeling that this was a solid and commendable production but not quite brilliant.
Please feel free to leave your thoughts and opinions in the comments section below!
Hamlet runs at The London Theatre, New Cross until 29th September 2013.
Box Office: 0208 694 1888 or book online at http://thelondontheatre.com/10.html.
Albert Clack Chris Matragos Hamlet Katie Ellen-Jones Merely Players Scott Ellis Simon Grujich The London Theatre William Shakespeare 2013-09-14
+Everything Theatre 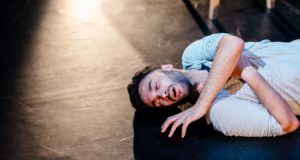