Pros: The concept gets you thinking, and the dialogue is clever and amusing.

Cons: The second half struggles to maintain the strength of the first.

Our Verdict: When it’s good, it’s very good. However, some of the scenes fail to captivate, and the ending, though effective on some levels, is a bit of an anticlimax. 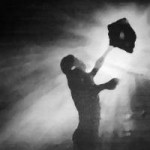 Do you believe in bureaucracy after death? Imagine getting to the pearly gates, and being met by a receptionist who needs to complete a pile of paper work before granting you entry. Soften the Grey, tells the story of a dead man discovering that his actions in life determines his eternal fate.

After getting trapped whilst scuba diving and running out of air, a man (Nigel Munson) dressed in a wetsuit and flippers, arrives at the Citizens Advice Bureau for the deceased. ‘Hello’ he calls out. No answer. He hits the desk bell. No answer. And then out of nowhere appears a figure (Jake Hassam) in corporate attire.

The opening dialogue between these two is very strong. The initial questioning from the receptionist, delivered at a rapid pace is both well written and performed. As the questions get more complex, the audience is taken through moments of the dead man’s past, recreated by the two actors. Reliving these moments, helps the man face the truth behind his actions, and gives him insight to respond to the receptionist’s questions. Some of these memories work better than others. The playful kissing scene between this man and his childhood friend is both charming, and interesting. But the scene where the man’s mother reveals she’s leaving his father is less so, and borders on cliché.

In between these scenes the man is also given glimpses of his afterlife options, for him to make an informed decision as to which is most fitting. Again, some of these work better than others. I really liked when almighty God tried to sell God’s Kingdom of Heaven as a possible afterlife. However, the part about reincarnation could have been funnier, and not so cheesy. There is also a game show sequence, which didn’t translate as well as it could, probably because their interpretations of good karma and bad karma were slightly ambiguous.

The performances are strong. The power play between the two central characters is very entertaining. The receptionist really captures the essence of an official, who appears to take a bit to much pleasure in complicating the lives of others. And the dead man, who cannot seem to win, is endearing in his attempts.

The ending works on some levels. It effectively highlights the redundancy of bureaucratic processes, which hinders or prevents any action or decision-making. However, for an audience it felt like an anti-climax, and I would have liked to see the characters reach some sort of resolution. But maybe it wouldn’t be true bureaucracy if they had.

Seen the show yourself? Agree or disagree? Submit your own review with our Camden Fringe Big Audience Project.

Soften the Grey was at the Etcetera Theatre for four performances, 19th-22nd August 2013, part of the Camden Fringe Festival.
Box office http://www.camdenfringe.com/?id=6