Pros: There is good improvisation, as well as funny scripted moments.

Our Verdict: The central story could be stronger, and some of the messages are questionable. But ultimately this play is written and performed for laughs. 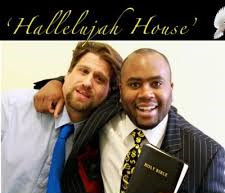 This comedy explores the business behind organised religion. Vestments and neckbands have been replaced with suits, and ties printed with dollar signs. Money and power are on the agenda as the pastors at Hallelujah House, a modern day church in London, prepare for a large-scale conference to celebrate their 10th anniversary. When scandals start spreading about their headline guest, the morals and motives of the senior pastor are questioned, and relationships are tested.

As serious as the premise sounds, this show certainly didn’t take itself too seriously. The drama surrounding the church and its members were secondary to the jokes and comedic performances. It was more about making the audience laugh, than making any real statement about modern day Christianity. Consequently, the moments where they tried to address more topical subjects, for example the Church’s take on gay marriage, didn’t resonate as well with the audience.

Yazz Fetto both wrote the play and performed in the show as Pastor George. Fetto has also written scripts for TV and radio programs, and in many ways Hallelujah House played out like an episode of a sitcom. It felt like I was tuning in to see what was happening at the church this week. Even some of the scenes reminded me of a soap opera, cutting at dramatic moments with a blackout as if going to a commercial break. The four archetypal characters were all entertaining. My standout was Darren, the youth pastor. Despite being a grown white man, he had perfected the ‘Jafaican’ dialect. And his performance of a Christian rap song complete with back-up dancer was highly amusing – the highlight of the show in fact.

The humour was further enhanced by some quick and clever improv. When the audience began applauding prematurely, Pastor Ray (Kevin Moore) turned and said ‘not yet’. When the lighting guy missed his cue, the pastor went off-script prompting him by observing how light it was when it should have been dark. And on another occasion, when a mobile phone started ringing in the audience, the cast made it very clear they would not continue until it had stopped.

This show has a good sense of fun, and is written and performed for the audience’s enjoyment. But as a piece of comedic theatre, the central storyline could have been stronger, and there may have been a few too many subplots for an hour-long performance.