Home » Features and Interviews » Podcast: An Interview with Jamie Nichols

Podcast: An Interview with Jamie Nichols

Author: Everything Theatre in Features and Interviews, Podcasts 16 August 2013 0 655 Views 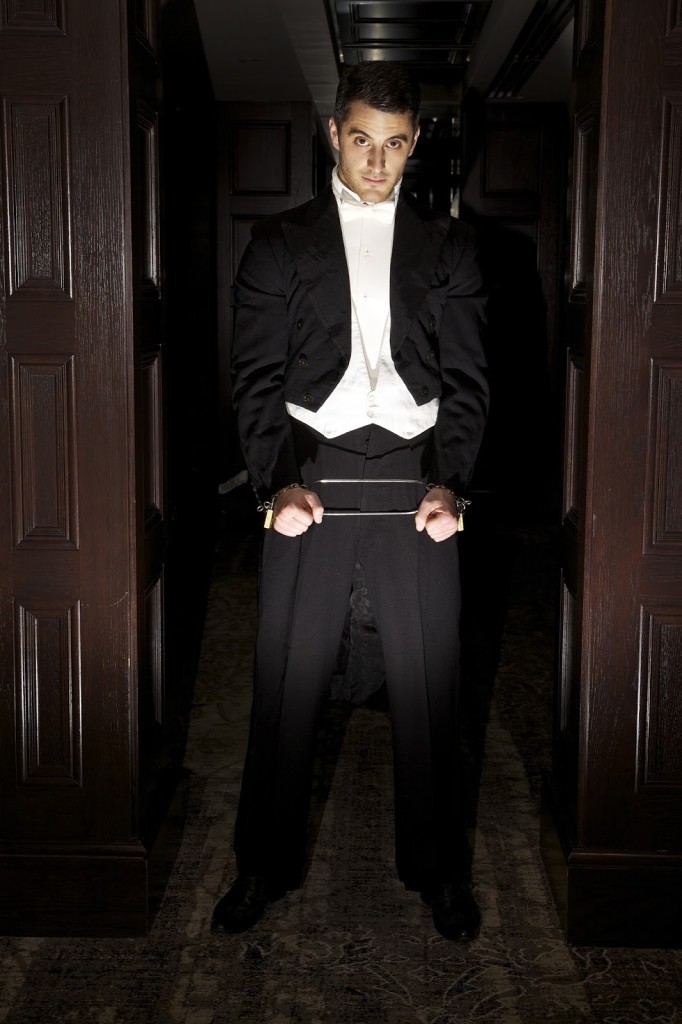 Welcome to Everything Theatre’s latest podcast.

Sometimes we interview people just because we find their work interesting, and we think that you may find them interesting too. These interviews aren’t part of any ‘initiative’ – they’re just a bit of extra fun! On this occasion, we spoke to actor Jamie Nichols. After working for several years in a regular office job, Jamie was cast in Gutted at the Theatre Royal Stratford East. This has allowed him to venture back into the theatrical industry. We spoke to him about his next role – the legendary Harry Houdini.

Listen to the podcast using the player below, subscript to the series on iTunes, or read through the transcript below. Please feel free to leave comments at the bottom of the page!

Everything Theatre: Hello and welcome to our latest podcast. We’re here with Jamie Nichols, who is going to be speaking to us today about his upcoming show, Houdini. Thanks for agreeing to speak to us! First off, it would be great to find out a little bit more about you. Could you tell us about how you came to work in the theatre industry and how you got this role as Harry Houdini?

Jamie Nichols: When I was in my early teens, I went to a summer school which focused on singing, dancing and acting. At the end of it, they asked me if I wanted to go on their books. From there, I did a few TV pieces, and a bit of theatre during my teenagers years. Eventually though, I got a job as a buyer in a construction company. Once I fell into work, I ended up going to fewer and fewer auditions until a got a lifeline with Gutted, and subsequently this role in Houdini. That’s how I got to where I am now.

ET: So this is your second professional production since leaving your full time job in construction?

JN: Yes – this time round I have such a fire in my belly, as I know what it feels like going to an office 8 to 6 everyday, not doing what I really want to do. I did commit to that job, but there was always something lacking from my life until I got back into theatre.

ET: That’s very exciting for you! Now, your first play was Gutted which was on at the Theatre Royal Stratford East. That was obviously a very different play from the one you are taking on with Houdini, but did that production fire you up for more acting work? Was that the catalyst to get you back into the industry?

JN: 100%. The author and director of Gutted, Rikki Beadle-Blair, had us coming in every morning at 8am for an hour of aerobics classes before starting rehearsals. I must admit that I had never been so excited to exercise at 8 o’clock in the morning. I would be travelling to Stratford and catch myself thinking: “Yes, this is what I want to be doing”. My alarm would go off in the morning and I would be up instantly, because I just could not wait to get to work. And if rehearsals ran over for a couple of hours at the end of the day, I wouldn’t mind at all. The previous four years I had been doing a job where I couldn’t wait for the end of the day, so to be finally doing something which I loved really fired me up. By the end of the run of Gutted, people were asking me what my next move was… At the time, I was due to be going back to work, and part of me was thinking “Please, please somebody tap me on the shoulder”. And then somebody did! A contact mentioned there was a role for a 5’8” non-Caucasian actor to audition for Houdini, and asked if I would audition.

ET: Now, I gather the audition process for Houdini was slightly unusual…

JN: Well, for one thing, the first and second recalls were during the last week of Gutted. Then after a while, they called in a third round of recalls. At this stage, I was working during the day and doing a performance of Gutted in the evening. So I was using my lunch hour and the interval of the show to learn my audition lines. Then they also said they wanted me to prepare something, which they were going to send me through the post. Unfortunately, the materials they sent hadn’t turned up in time, so they asked me to prepare one card trick and one magic trick. Now time was short, as I only had a few days before the recall, and I didn’t know any magic tricks at all. I managed to get in touch with a friend of a friend through Facebook. He spent the weekend teaching me 8 or 9 tricks which I could practice after work before the audition. We decided that an apt trick would be escaping from a pair of handcuffs (as Houdini did in London’s hippodrome in 1924). I only really had one full day to practice this, so I physically did not take these cuffs off for nearly 12 hours! The neighbours might have been a bit confused…

“I physically did not take these cuffs off for nearly 12 hours! The neighbours might have been a bit confused… “

ET: Well congratulations on getting the role! Maybe you could tell us a little more about the play itself? Does it focus on Houdini’s life?

JN: Yes, exactly. Harry Houdini was part of a family of 6 kids. Initially, he was working closely with his brother Theo. They would travel around as a duo, until Harry met the love of his life, Bess. She eventually replaced Theo as the second half of the act. All along, Theo was supportive, but actually there was a little bit of resentment that he wasn’t part of the team any more. You can imagine where the story goes from there: Theo and Harry become famous, but in a way they are competitors. In the show, we are going to have a couple of Houdini’s trademark illusions being performed – and they are not being tricked, we are going to be doing them live on stage. Some of them are his famous escapes… for example, I am going to be going through Scuba training over the next fortnight, reasons for which will become all too clear when the show is performed. So not only will there be the drama of the story itself, and the great writing by Stuart Brennan, but we’ll also have some daring illusions for the audience.

“I am going to be going through Scuba training over the next fortnight, reasons for which will become all too clear when the show is performed…”

ET: Sounds exciting! In terms of getting into character, it must be quite difficult for you as an actor, not least as there aren’t that many sources left of the way Houdini actually spoke and acted?

JN: No, but there is plenty of material. At the time, in the early 1900’s, not a lot of people knew the name of the US president, but everyone knew the name of Harry Houdini. This was because he represented freedom – not just because of his escape tricks, but also because he came from such poor background and rose to stardom. It terms of modern-day equivalents, it is quite tough to find a benchmark, but there a a lot of people who were heavily inspired by him. For example, people like Jonathan Goodwin, Dynamo, David Copperfield… and then there are films like The Illusionist, The Prestige, Now You See Me, etc… There is so much at my fingertips. I have pictures of Tony Curtiss playing Houdini in the 1953 film about him, and even pictures of Houdini himself on my wall. They are the first thing I see when I wake up everyday.

ET: Were you into magic before this role came up? Do you have a trick you could share with us?

JN: Not at all – my first ever magic trick was for the audition, but I have really got a taste for it now! Here is a trick which requires a bit of imagination, which I used during my audition. Hopefully listeners will be able to appreciate it too:

Here is an imaginary deck of cards for you to shuffle. When you’re confident they are well shuffled, pick a card from the deck, and place it flat down on the table. Have a peek at it, make sure you remember it. (ET: We chose the 9 of diamonds). Here is an imaginary pen, now please mark a cross on the card from corner to corner, then put the card back in the deck. On the count of three, toss the deck back into my left pocket. JN now produces a real, physical deck from his left pocket. Now let’s go through this deck, and you can point out your card to me. We find the 9 of diamonds in the deck. Right, now I am going to hide your card, the 9 of diamonds, in the deck again. JN hides the card in the middle of the deck. Now let’s look for it again. What else is distinctive about your card? The cross on the back which you drew with your imaginary pen! Right, let’s look for this card with a cross on it. JN finds a card in the deck with a cross on the back. He turns it around to reveal the 9 of diamonds.

ET: Wow! That’s very impressive. So, when can we catch the show?