Home » Reviews » Off West End » When the Fallen Sang, St Giles in the Fields

When the Fallen Sang, St Giles in the Fields

Pros: An energetic cast, emotional stories and a wonderfully coordinated production which may have proved tricky for other directors.

Cons: The script dragged towards the end and it was slightly confusing.

Our Verdict: An innovative production in an amazing setting, highlighting the moving stories of those who seek solace in St Giles. 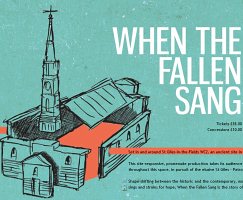 The setting for When the Fallen Sang could not have been more magical. St Giles in the Fields is an ancient church near Tottenham Court Road with a stirring history, parts of which are depicted in the play. St Giles is the the patron saint of outcasts and in collaboration with the homeless charity St Mungos, the lives of these various outsiders are portrayed at different points in time. The stories intertwine at times and it all come together towards the end, with all characters seeking the acceptance and comfort of St Giles.

Each of the stories were haunting in their own way. A new mother’s struggle with alcoholism set in a past century and a businessman, played by Glenn Supple, struggling with the same vice in the present day. Nick Danan’s leper flitted between past and present acts to provide the businessman with some words of wisdom whilst scaring Caroline Colomei’s optimistic Queen Matilda, during her 12th century charitable endeavours. Jack Lewis was poignant as St Giles himself, immersing himself in his own existential crisis and the saddened calls of the outcasts.

The performance took its audience on a journey, literally. For each act, we were led by the cast to a different area within the site. This concept in itself was great, something I hadn’t experienced as yet (except for at the London Dungeons), really helping to make the show unique and exciting. The acts flowed well from one area to another, a result of great direction by Marie McCarthy of Lightening Ensemble.

The areas chosen for each act were selected carefully to give the audience a true feel for the scene at hand. A very emotional mother-child scene at the beginning was set appropriately in a low lit moody chamber, whilst the grand entrance of Nick Danan playing a leper, saw him emerge from the floor of the grand church in a puff of smoke. No seriously, I was actually coughing for a moment through all the smoke. This scene in itself was visually the most striking of them all and Nick Danan definitely hit the mark as a dry witted leper from the past who counsels the drunken businessman. The cast played various roles throughout the play and I actually felt that Nick actually stood out the most in his roles throughout the play, slipping into each of his characters confidently and naturally.

Glen Supple’s portrayal of a businessman on a downward spiral was magnetic and emotional. Whilst some of the script provided for him may have waffled on toward the end, it was still very dramatic and poignant.

I was initially shocked to hear some of what I percieved to be the audience, sporadically break out in humming and whispering during and in between acts. Not because it was in appropriate or anything, it fitted into the play well, made it very spooky. It was more of a ‘Where on earth did she come from!?’ reaction when the lady next to me broke out in whispers of ‘St Giles, St Giles, St Giles, St Giles’.

Some of the writing was slightly confusing when attempting to link the future and past. Caroline Colomei’s airy fairy Queen referenced something about talcum powder not being invented as yet, which could have been for comedic value, but didn’t quite fit. The monologues towards the end may have also felt a tad tedious, but were performed with real energy and vigour.

The general theme of outcasts was something that resonated with me as it must do with many others. I’m sure we all feel like outcasts at some point or another, feeling lost, alone and angry. The hope that this story ended on, that there is light at the end of the tunnel, that there is someone, somewhere to hear your cry and lift you up, it kind of felt like a spiritual hug.

In all, the show successfully gave its audience something different to the standard sit-and-watch performances. Some slight script changes may have bought it together more succinctly. This type of moving perfomance format can be difficult to achieve, expecially in a site-specific context rather than in a theatre. This seemed to have done with ease. The cast and crew have created a worthy and inspiring production.

When the Fallen Sang runs at St-Giles-in-the-FIelds until 20 July 2013.
Book online at https://www.ticketsource.co.uk/search/searchVenueDetails.asp?venue_id=40726

Previous: Twelfth Night, Hampstead Theatre
Next: Everyone Theatre: An Interview with David Jubb