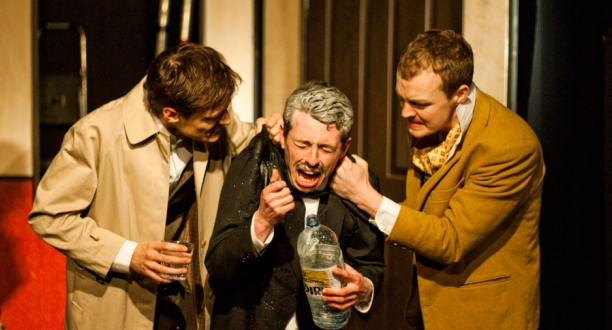 Pros: A great script, some terrific acting and lots of big laughs.

This is a riotously fun show filled with huge energy, great gags and painfully funny performances.

As we all know, the lovely Meryl Streep is considered by many to be the greatest actress on the planet and I tend to agree with this sentiment. However, my favourite Streep performance is a controversial one; her portrayal of the disastrous screen ham Madeleine Ashton in Death Becomes Her is, for me, Streep’s ultimate crowning moment. I’ve heard people gasp in disbelief at my choice before talking me through a seemingly endless list of perfect performances. However, although I admit mine is an unusual choice, part of my reason is that I believe it takes a truly great actor to play a bad actor extremely well. It’s not enough just to ham it up and say your lines badly (anyone can do that) but rather, it takes clever observance and enormous amounts of subtlety to really pull it off. Meryl creates a real person in Madeleine – vindictive, self-centred and ruthless – to underlie the character’s bad acting, which in itself is performed with thoughtful precision.
This is partly why this show works so well. This is a comedy about a hopeless amateur dramatics society whose show starts off on a bad note before sinking further and further into the realm of complete disaster. Henry Shields turns out a very skilled performance as hapless ham Chris. Shields creates a character who thinks he is the real talent of the ensemble, an amateur performer who I imagine secretly believes he could go pro and who looks down on his fellow actors. His exasperated mumblings and superior attitude felt like a nod to Basil Fawlty, without seeming like an outright impression. Similarly, Jonathan Sayer creates a realistic person – an absent minded, fumbling mess who can’t remember his lines or where he has left his props. Sayer’s own acting in-between his character’s bad acting is completely terrific and he garners many of the biggest laughs of the night. One brilliant example is when his character has mistakenly learnt off the stage directions and says the word ‘exit’ after he says his lines without actually exiting. This leads to Shield’s character, Chris, subtly hinting at him to get off the stage while Sayer just looks around baffled. This is a little piece of genius and a perfect example of what this show has to offer.
Another excellent element of this show is, of course, the riotously funny script. There wasn’t one moment where the audience weren’t in fits of giggles and sometimes the actors had to wait some time till the audience calmed themselves before continuing. As the play within a play gets worse and worse, this show itself gets better and better with moments which will have your sides aching. At one point, the lead actress gets knocked unconscious by a slamming door while the other actors continue to play the scene as normal by skipping over her lines which means the scene is drained of any sense. Other highlights include a human mantelpiece (because the real mantelpiece fell off), unintentional partial nudity and the set catching fire before later collapsing all around them. Everything from the set to the costumes to the make-up are all so bad that they’re good, and there is a lot of very clever direction from Mark Bell which ties the show together nicely.
One minor issue is that not all of the actors are on the same page. Most have decided to create believable characters who are poor amateur actors whereas others have opted for just delivering the dialogue badly and behaving outrageously. That’s not to say that the latter aren’t probably very good performers but the lack of real character depth underneath the ham made their performances seem comparatively flat. Sometimes this got a bit much for me and the over-the-top slapstick escalated to being vaguely annoying at times. However, this doesn’t detract much from the overall enjoyment of this show which really is terrifically funny from start to finish.

Previous: Silence, Brockley Jack Studio Theatre
Next: Knock Yourself Out, The Courtyard