Everything Theatre blogger Rachel Proctor gives her opinion on the treatment of younger people in theatre audiences, concluding that a little more consideration wouldn’t go amiss…

You might have gathered that here at Everything Theatre, we’re rather fond of sitting in the dark with a room of strangers soaking up a bit of drama. Nothing I’d rather do, if I’m honest. You might also have gathered that several of us are under the age of 25. Wanting to enjoy the theatre and being under the age of 25 is not something that our fellow audience members always think is compatible. 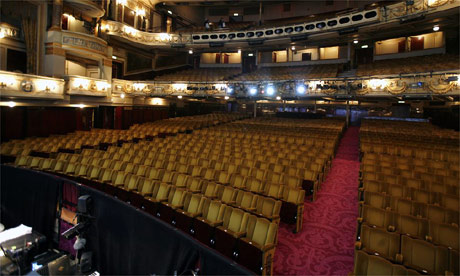 The Theatre Royal awaits it’s next audience.
Credit: David Levene for The Guardian

Young person equals nuisance for many, many people. I can remember one incident as quite a young teenager, when a number of girls from my school went to see a play. Can’t for the life of me remember what it was, but the main incident that does remain lodged in my memory is the moment when, half way through the second half, a woman turned around and smacked my friend across the leg. A friend, I must add, who wasn’t even the one making noise.

Just the other day I sat next to a woman who huffed for the entire first half of a show at the young girl on her other side, who was trying but failing to suppress a cough. Annoying, I agree, but she was doing her best, and she was far easier to tune out than the angry noises coming from the lady next to me. And this girl left in the interval. Her friends returned, but she didn’t come back with them. What if she never goes to the theatre again? What if that’s it for her and the wonderful, joyous experience of watching a drama unfold before you? That she might be lost to theatre makes me so sad.

This attitude persists despite huge numbers of theatres across the country making a concerted effort to increase the percentage of their audiences who are aged 25 and under. These efforts are hugely important. One of today’s youngsters will eventually be the Prime Minister, and wouldn’t it be nice if he or she had grown up knowing the immense value of theatre to wider society? Alternatively, they could be someone who was unfairly victimised just for being a young person in a theatre. Maybe that’s what happened to the current Cabinet, but who knows. Yes, yes, I know it seems silly and overly dramatic, but you get my point.

In some ways I wish I could stay under 25 forever. Relinquishing my EntryPass at the National will be a hard blow to take. No more cheap tickets to the Old Vic, the Hampstead or the Young Vic for me. But if on the same day I no longer see other members of the audience grimacing when they see me walk through the door, then that increase in ticket price will be more palatable.

It isn’t the case everywhere, and I’m certain it’s the minority who feel like this about young people. They just happen to be a rather vocal, rather rude minority. I’m also not saying that everyone my age is an angel; I just ask that we be treated as you would treat everyone else. I saw a middle-aged lady hit my friend in a totally unprovoked assault, but I don’t assume that every middle-aged lady is going to be a trouble-maker. The same pattern of thought should apply to young people – we have the occasional bad apple, but we’re not all bad!

We aren’t going to talk. We will turn off our mobile phones. We will do our best to suppress coughs and I, personally, have a spectacular inward sneeze that has been developed over years of theatre going. We’ll stand up if someone tries to walk past us, not just do that thing where you breathe in but actually make no more room. This isn’t the first time we’ve been to the theatre – in my case I suspect that I’ve spent more time in them than the vast majority. Plus, I queued from six this morning to get this ticket, because unlike you I can’t afford to pay full price. So just give us a break, please!

Whilst these negative attitudes persist, I will remain unsurprised that so many of my friends don’t go anywhere near the theatre. Price is often top of the list of objections, but a night out at the National is almost certainly going to be cheaper than a night in the pub. Then there’s the not knowing where to start. I get this, especially somewhere like London where there is so much on in the West End, let alone in the far richer tapestry of the Off West End! I like to think that blogs like ours helps with that problem to some degree.

A young audience enjoys a trip to the theatre.
Credit: David Levene for the Guardian

Finally however, there is the discomfort. The not knowing what to do, where to go, how things will work. Those exact feelings we all get when we go somewhere new for the first time. If we are going to successfully diversify our audiences we’ve got to help people get over that. It seems to me the logical answer to this is to get them in early, and to make them feel welcome when they do attend. Far easier said than done, of course.

If theatres are taking the initiative to open their doors to new audiences of youngsters, then I’d like to think that’s because we recognise as a society it is important to have young people in theatres. So perhaps it just boils down to the motto I always seem to find myself returning to: just be nice!

This of course applies to everyone, both younger and older. Be more considerate. Don’t make sweeping assumptions about vast swathes of your fellow audience members. Have a little thought for those people around you, and the whole experience will be much more pleasant for everyone involved.

What do you think? Agree, disagree, had an experience you want to share? Let us know using the comments section below!

Previous: Our beginners’ guide to the London theatre scene!
Next: Impotent, Lion and Unicorn Theatre