Home » Opinions » Our beginners’ guide to the London theatre scene!

Our beginners’ guide to the London theatre scene!

A quick overview of London theatre, suitable for tourists, city-breakers and those less well acquainted with London’s theatrical offerings!

London’s theatre scene is the most diverse in the world. In addition to the glitz, glamour and huge names that grace the boards of the West End, there is a veritable theatrical paradise hidden away in the nooks and crannies of the capital. These fringe theatres – often known as London’s Off West End – are where some of the best (and cheapest!) shows can be found. So let’s rattle through our recommendations!

SAFE HAVENS
These recommendations are not for specific shows, but for theatres which have a track record of staging consistently good productions, many of which are only on for 3 months or less. 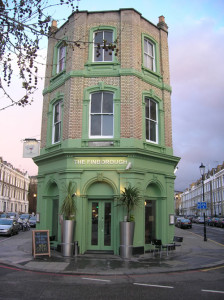 The Finborough is one of our favourite London theatres.

Let’s start with the National Theatre. The UK’s flagship theatre consistently stages the best shows around. It tends towards plays over musicals, and it attracts heavyweight actors and creative teams meaning that productions are always of the highest quality.

For something a bit smaller, try the Finborough Theatre in West London. It’s a small and intimate place (50 seats), but the quality is superb. The focus here is on new writing and rediscovering lost classics. It’s also much cheaper than your average West End show.

If you’re feeling experimental, then look no further than the Ovalhouse in South London. It’s a friendly and vibrant venue which stages all sorts of shows from political observation pieces to gay drama. Again, it’s well priced and excellent quality too.

Lastly, try the Menier Chocolate Factory. This cool place stages all manner of interesting shows, but it often has some very good and less-well-known musicals on. It’s also got a good restaurant attached to it. It’s not cheap, but it’s not expensive either.

FANCY A LAUGH?
The top comedy in London at the moment is One Man, Two Guvnors at the Theatre Royal Haymarket. This is good old-fashioned slapstick, which will have you rolling in the aisles. Straight five and four star reviews in both London and Broadway, it’s utterly brilliant and it earned James Corden a Tony Award for best actor when he was in it. He’s not missed though: his replacement, Owain Arthur, is just as good, and Rufus Hound, who takes over the lead role in February, will probably be excellent as well! It’s pricey, but totally worth it. 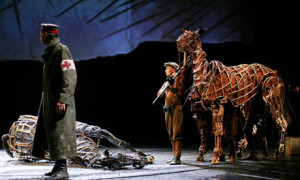 War Horse is one of the best shows on the West End.

NEED A BIT OF DRAMA?
It’s got to be War Horse at the New London Theatre. This remarkable production has captured the world’s hearts and become one of the most successful productions of all time. Take tissues if you are prone to crying; this one tugs the heart strings in a big way. Incidentally, both War Horse and One Man, Two Guvnors were created by the aforementioned National Theatre!

LOVE A MUSICAL?
You’re in luck! Most of the big West End shows in London are top-quality musicals. Wicked! is often voted the audience favourite, but I would recommend Les Miserables at the Queen’s Theatre. London’s longest running musical has been going for 27 years, so surely that many people can’t be wrong?! Be warned though: musicals are expensive!

ON A BUDGET?
There are plenty of theatres in London where tickets cost the same – or even less – than a cinema ticket. The Finborough and the Ovalhouse are good examples, but there are literally hundreds of brilliant theatres where you can get tickets for around £10-20. For help finding them, try OffWestEnd.com, a great website championing these smaller places. 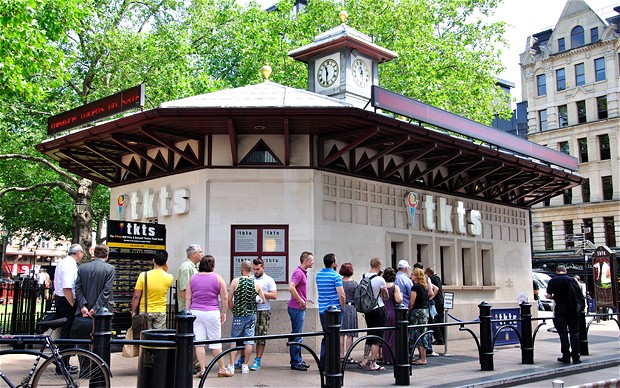 Check out TKTS in Leicester Square for some great ticket deals.

If you’re committed, you can get cheap tickets for many of the big shows on the day – they’re known as day release seats. However, it will often require you to get up early and queue outside the venue. I once queued from 5am until 10am for example. Is it worth it? Absolutely! They are usually around the £10-20 mark, and they are often on the front row. Always ring the box office before you turn up and queue to find out what their policy is though.

Finally, there is the TKTS booth in Leicester Square. This sells half price tickets to loads of West End productions. You buy on the day of the show, and availability varies from day to day, so just turn up and see what’s available!

Questions, comments, opinions that you want to share? Do you think we’re wrong? Agreements, disagreements etc, we’d love to hear them – use the comments section below!

Previous: The Way You Tell Them, Camden People’s Theatre
Next: Young people in theatre audiences aren’t all trouble-makers!