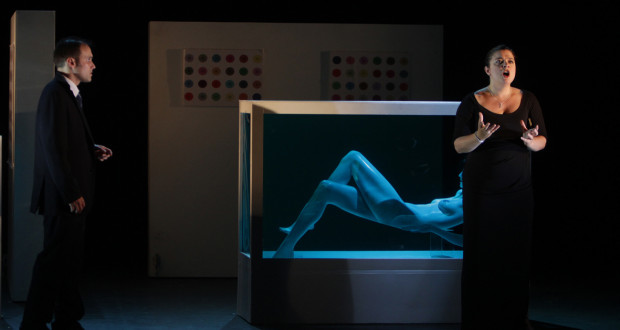 Pros: Great fun, accessible and easy to watch with superb production values. Cons: Slightly disappointed with the (still very good) music, a long running time at nearly 3 hours. Since we began this illustrious blog last year, we’ve reviewed three musicals, ninety-six plays and no operas. In fact, let’s be honest, I have only ever been to one opera in my life. That production didn’t really do anything for me – I preferred it to anything created by Andrew Lloyd-Webber, but that’s not saying much, and it certainly didn’t encourage me to venture further into the operatic world. That&hellip;

A great evening, brought to life brilliantly by Co-Opera Co, but not sure we’re completely sold on opera yet.

Since we began this illustrious blog last year, we’ve reviewed three musicals, ninety-six plays and no operas. In fact, let’s be honest, I have only ever been to one opera in my life. That production didn’t really do anything for me – I preferred it to anything created by Andrew Lloyd-Webber, but that’s not saying much, and it certainly didn’t encourage me to venture further into the operatic world. That was nearly four years ago now though, so it is time I gave it a second chance with a trip to the Co-Opera Co’s production of Don Giovanni. And d’you know what? I’m glad I did.

A couple of weeks ago, mid-rehearsal, we interviewed Co-Opera Co for a podcast. The company themselves are doing sterling work in bringing new talent into their productions, and from the interview the thing that stuck with me most was their passion for what they do: these guys love opera more I love plays. Chatting to them directly helped us get rid of any preconceptions we had of opera as pretentious and stuffy, two things that this production is anything but.

Don Giovanni itself is basically the story of Don Juan, a naughty womaniser who treats everybody like crap and eventually gets his comeuppance. It’s a sexy story, full of modern themes despite its historical roots, and I certainly think it was a good show for us to start with. The production has been brought forward to modern times, set in art galleries and various different trendy places with a superb set designed by Katie Bellman. In fact, all the production values were fantastic; great set, great lights and a tremendous orchestra. My only suggestion is that during the instrumental parts I would have liked it to be a little louder, to be swallowed up in Mozart’s music.

More importantly though, the company have done wonders in making this a fun and accessible production. I heard the word ‘twiglets’ (yes, the marmitey snacks…) sung operatically; I heard ‘street-lingo’ sung by characters dressed up like rappers; and in a personal favourite moment I heard Don Giovanni himself shout ‘Come to the Big Party!’ from off-stage, which caused my co-blogger Louie to have a slightly embarrassing laughing fit. Any ideas that we had of this being boring were ill-conceived: this was good entertainment.

The cast, too, were very strong. David Milner-Pearce made for an excellent Don Giovanni. Arrogant, sickeningly confident, slimy and basically a very bad man, it was a great performance, underscored by a great singing voice (I want to say a tenor, but really I have no idea what I’m talking about at that level). Yair Polishook’s portrayal of the demeaned servant Leporello was superb as well, shy-yet-cocky, and at the end I did find myself feeling very sympathetic towards him.

So what did I not like? I think that my biggest disappointment was the music bizarrely. Don’t get me wrong, it was great stuff, but I was hoping it would give me a little more rousing. It almost felt slightly less important than the rest of the production, which I was not expecting; I didn’t come away humming the tunes, I came away laughing about the twiglets. In addition, it does run on for a bit – nearly 3 hours for a story which is not all that complicated felt a little extreme. These are minor issues though; overall I came out with a smile.

I’m very glad I gave opera another shot. I’m not going to say I’m sold on it yet, but I may at least think about taking a visit to another production in the future. My inclination is that I enjoyed this more because of William Relton’s lively and energetic interpretation than I did because of the genre itself. However, that might be utter rubbish, and I’ll never know unless I go and see another!